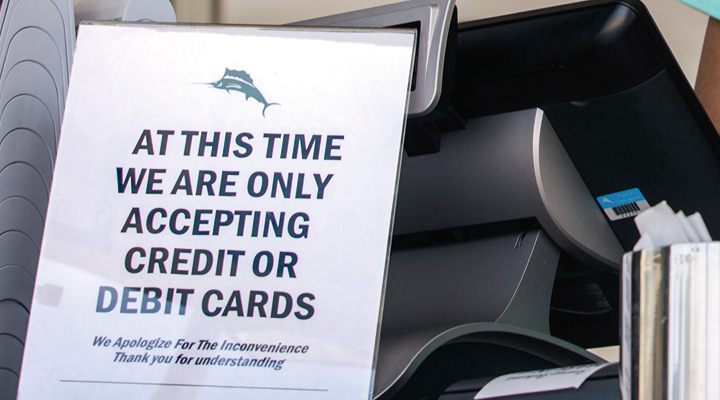 In the article, “Should Cashless Businesses Be Banned?” (Upfront, Martz, 2020, Subscription required), I learned that there has been a debate that poses the question, “Should America move over to a cashless society?” In recent years, many businesses have stopped accepting cash and have only started accepting card or digital pay as payment. This article provides two sides of the argument.

One side states that not all Americans have access to a bank account or credit and debit cards. This would make it difficult for those people to buy anything. This side also states that cashless transactions leave the customers at a risk of a data breach, and also states that cash is a consumer choice, which should be left to the people.

The other side of the argument states that digital and card payments have been increasing in recent times, and that the world is changing. This side also states that you don’t even need a card to make cashless transactions, since there are many apps in which you can pay digitally.

0
Please leave a feedback on thisx
Do you think we should move to a cashless society?

Personally, I feel like removing cash transactions would create many problems. As stated before, not everybody has access to digital or card payments. Some people also just prefer cash over card. There is also the problem amongst the youth as well. Many teenagers may not have access to a bank account or credit and debit cars. Something that all teenagers have access to, however, is cash. Cash makes it easy to make simple transactions, such as buying a snack at the store. By removing this option, many teenagers would find it difficult to buy things.

I am interested in your post “Cash or card?” They talk about how not a lot of people don’t have bank accounts and can’t afford to use a debit card. Some people also cannot afford it since they might think they’re going to get in trouble with the government.

One sentence you wrote that stands out to me is: ” One side states that not all Americans have access to a bank account or credit and debit cards. This would make it difficult for those people to buy anything.” I think this is important because how everyone thinks it’s easy for everyone to get a bank account and to be able to afford it. What some people don’t know is that a lot of people don’t have a lot of money to be able to have an account because they won’t be able to keep putting money in their account.

Thanks for your writing. I look forward to seeing what you write next because you talk about something that not a lot of people talk about and how things can affect others. Also, people think it’s easy for everyone to afford an account or to have a lot of money to pay for everything with their cards.

Im pretty intrigued by your post even just reading the title, “Cash or Card?”. As soon as I saw it and read the little description, I was hooked just because it deeply concerns my family and me. My parents use cash and aren’t the best at using technology and even though I know how to use a debit card, I still prefer to pay for certain things in cash.

One sentence that stood out to me was, “cash is a consumer choice, which should be left to the people.”. This was OMG!!! As soon as I saw this quote I immediately connected it to the government. Just for the fact Im learning so much in my Gov’t class and this totally connects to popular sovereignty and the 10th amendment. (rights not in the constitution are left to the people)

Thank you for your writing, it was really cool to this type of topic, especially since the world as it is right now, is very “money hungry”. I hope to see you post more about subjects that possibly even connect to the government or even in the hands of the people.

I really like some of the points said, but one of the things that I think was neglected to be mentioned was that with cards, you can track every single thing bought by a person. A paper trail is a little harder to follow and for better or worse it’s another interesting topic of debate. I think what you said about teenagers not being able to buy things is another good point. I don’t think many teens get a credit card so taking away straight money is just a terrible idea.

I am very intrigued by your post, “Cash or Card?” because it is such a well-known topic that has a lot of opinions and thoughts on. This topic should be discussed about because many people have had issues at stores just because they don’t have access to a credit/debit card.

One sentence you wrote that stands out to me is, “This would make it difficult for those people to buy anything.” I think this is a statement that everyone that only carries cash in public would agree on because that cant make a purchase.

The use of card will actually be better then just carrying cash as well in my opinion because if you only carry card , then you wont have to worry about your money falling out and you wont have to carry a lot of cash on you . At the same time, people that don’t have cards can be affected. There are pros and cons to having a debit/credit card just because there are some places where they only accept card and some places were they dont accept card and there can be a risk of data breach with cards.

Thank you for your writing. I look forward to seeing what you write next about different topics.

In my opinion, I think we should move into a cashless society. Reason being is because carrying around cash everywhere we go is an ancient practice. With debit/credit cards, money can easily be used by a click of a button, scan, or swipe. Essentially, money will be stored in a bank account, and instead of taking out cash to buy necessities, I can easily buy those necessities with the use of a card.

We all won’t have to carry heavy loads of cash when we go shopping for food. The use of cards is also more convenient, and will become a common practice as the world is shifting into a technological era.

I understand that most people don’t have access to bank accounts, mainly teenagers who aren’t employed. However, access of bank accounts to teenagers all depends on the parent to create one.

I am very curious about this topic of writing about cash or card. There are many cons about using cash, like accidentally losing it. And cons of using card, like the risk of data breach.

I thank you for bringing up this topic. Can’t wait to see what other topics you discuss about on this website.

Hi Emmanuel, your reply to this post is very agreeable. I think we share the same opinion that with debit/credit cards it is more convenient and that there are pros and cons about having a card. I think that carrying a card in my opinion would be better then having cash everywhere but at the same time you should carry at least $20 just in case. I understand that many teenagers don’t have a card, but they should create a debit card with the help of there parents if they have a chance to get one.