Capital Punishment. Moral or Not?

Home Capital Punishment. Moral or Not? 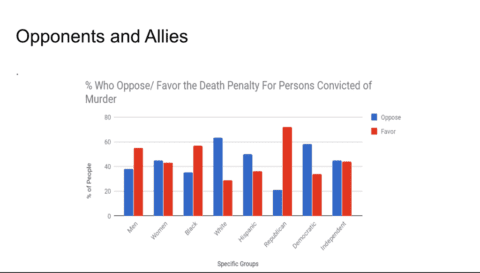 I am passionate about this issue because I believe anyone who commits a crime worthy of the death penalty really deserves to suffer for their whole lives. I don’t believe they should be able to take such an easy way out. The death penalty also goes against basic rights such as the human right to life. Prior to starting this project, I knew that capital punishment was in effect in the United States and that often innocent people were wrongly sentenced to death. This is also another reason why i am passionate about this issue because I believe it is not fair for innocent lives to be taken away due to an error in the justice system. I feel that there should be more evidence required to convict someone of such a serious crime with such serious consequences. I feel that Dna evidence should be required or video evidence in order to put someone to death. This would reduce the chances of an innocent man being put to death.

I found your opinions and research on the death penalty very interesting. Specifically, when you said, “…capital punishment does not lower homicide rates,” I was incredibly intrigued because in my opinion, many people believe in the death penalty because of its effects. Do you believe that the death penalty is ever an acceptable way to deal with a crime? You stated that you don’t believe people should get off the hook that easily. What would you do differently? Here is a website that investigates the pros and cons to the death penalty. https://deathpenalty.procon.org/ In my experience with the justice system, I believe that the death penalty can be warranted, but only in certain extreme cases. By my experience, I am referring to my aunt being a Judge who has dealt with several awful criminals, however, she has never sentenced anyone to death. I would love to hear more about this subject if you research more, or a specific death penalty case that you agree or disagree with. Thanks for your thoughts!

Patryk,
Your opinion is presented clearly and I can see you oppose the death penalty. Your reasoning is clear and precise. The statistics mentioned give a thorough understanding in the second part. But in order to form a well rounded argument, you should elaborate more on the side supporting the death penalty. You may want to check out this article to see some of the reasons people may support the death penalty, besides a lowered crime rate. https://deathpenalty.procon.org/

I am relieved you feel the same way about the death penalty in your post. ” Capital Punishment. Moral Or Not?” because…

One sentence you wrote that stands out for me is: “I feel that there should be more evidence required to convict someone of such a serious crime with such serious consequences. I feel that DNA evidence should be required or video evidence in order to put someone to death. This would reduce the chances of an innocent man being put to death. ” I think this is so very true because there’s too many cases now a days where the wrong person gets convicted of a crime and loses their life to this mishap.

Another sentence that I was actually surprised by was : “ In addition, the methods of capital punishment usually consist of lethal injection or electrocution. Firing squads were used three times since 1976 and gas chambers were used 11 times. The total murders since 1976 is 1472.” This stood out for me because i never knew anything about gas chambers in a jail. Just imagining someone dying from that when they didn’t deserve it is a bit depressing.

Your post reminds me of something i’ve seen on the news before. Like i had said before there’s too many cases of people getting wrongly convicted.
Thanks for your writing. I look forward to seeing what you write next because i’d like to see if there’s an update on all this. Especially if it’s mandatory to have that concrete evidence.