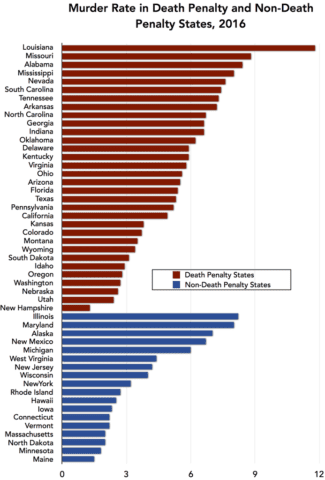 The ancient tradition of capital punishment has been used by many different civilizations since the beginning of time. With an ‘eye for an eye, tooth for a tooth’ mindset, humans have been watching other humans pay their debt of crime with their lives. You would think that by now we would have a more empathetic view of other people, or at least a different tactic for making prisoners “pay the price”. Yes, we are seeing that the number of states banning the death sentence is steadily growing, but this is happening slowly, and quite frankly it should have happened a long time ago. How is it that in the civilized world we live in today, our government has the power to execute those they deem worthy of death?

With all the statistics pointing to the conclusion that capital punishment is not effective it is baffling to accept that the U.S still practices this form of “correction” for one’s actions. In fact, according to the Death Penalty Information Center, 88% of past and current top criminological society presidents state that the death penalty is not a deterrent to murder. If it isn’t fixing anything, what even is the point? The government should only have the most necessary laws in place: those that are absolutely needed for our freedom, our safety, and our justice. The death penalty violates the freedom aspect of this.

Whether you are religious or not, I speak for myself and probably many others when I say it is unjust for a ruling body to decide the end of any person’s life. Each person deserves dignity and freedom to live the life they were given. Prison is punishment enough for crime. It keeps criminals off the streets, and I can only imagine that life in prison must be miserable. Letting days waste away when one is incarcerated feeling guilt for their offense would take an immense toll on a life. If people are into the idea that others need to have ‘had what’s coming’, then this satisfies that without killing a possibly innocent person.

These are my views on the death penalty having lived in a state that still practices it, in a country that hasn’t yet gotten rid of the tradition yet. I believe that we should have moved past this method of punishment long ago, but the fact that it still happens is sickening. If you have an opinion on this social justice issue, please share it. It’s important to keep the dialogue going among those with varying views, especially with a controversial topic like this.

I agree that the death penalty is pointless and needs to be abolished, keeping criminals off the streets is a solution enough. Killing them wont do anything. As your evidence suggests it doesn’t deter murderers from murdering people. So the death penalty needs to go.