Can We Colonize Mars?

Home Can We Colonize Mars? 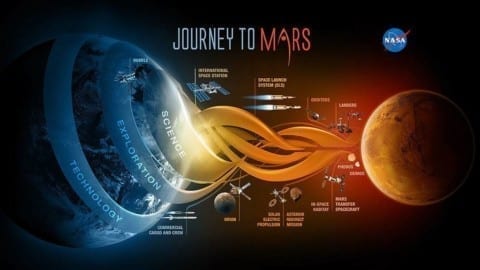 The colonization of other stellar bodies would benefit the community of Earth indefinitely. In a world plagued by climate change and uncontrolled consumption of resources, being able to terraform and survive on another planet is necessary to guarantee humanity’s thriving, and destructive, nature. Although something of this magnitude would seem impossible, current technology already allows us to accomplish this immense goal. However, anything outside of direct survival would still pose a challenge.

As of right now, we have the capability to offer people a one-way trip to Mars, the closest, possibly habitable planet. The requirements for surviving on another planet are monumental. We would require an artificial atmosphere, unless we desire to have a helmet permanently stuck to us whenever we venture out of a habitat. We would need the ability to produce farms, which would require us to create a similar atmosphere that of Earth. To guarantee survival beyond the initial month, a source of water, a water cleanser, and a water recycler would be necessary. These resources would cover the basic necessities of initial contact.

The colonized planet would become almost completely independent of the home planet for long durations. There would also be numerous risks of any transports being destroyed en route to the colonized planets. The residents of the planet would need these capabilities: mining, manufacturing, and precision on a high level, with minimal resources. Without an atmosphere, carbon dioxide scrubbers are the most critical resource available to the inhabitants. All residents must be highly trained and educated, and be able to produce equipment necessary for prolonging survivability. With the rise in 3D printing technology, this task has become far easier to accomplish. However, therein lies the issue. The residents would need to be able to procure resources similar to those on earth, in large quantities, and quickly. They must also have the ability to refine and manipulate these resources.

All of this would not be possible, if we did not have a certain resource: humans. How many people can we send over at any given moment, and would they be able to accomplish all tasks necessary? Could be invest in robotics, and send helpers along with humans that could operate at a higher efficiency in certain tasks.

In order to increase the chance of success, would we need to raise a generation of people specific to this task, training them in all necessary skills? What would be the cost of such an expedition, and would it really bring back any immediate benefits? Would it be possible to create an artificial atmosphere on the scale of a planet to expedite growth and standard of living, and what would be the psychological and physical effect on the inhabitants of another stellar body? Does Mars possess any extraterrestrial life forms, however grand or microscopic?

According to a post by spaceplace.nasa.gov, “Most scientists agree that the results do not reveal any signs of life”. There has not been any life detected on Mars despite more than 10 years worth of exploration and searching by rover and satellites. However, Mars is a large place, and it does not necessarily mean there will never be any extraterrestrial life found on Mars. The process of colonizing Mars remains a debate. According to Behrokh Khoshnevis, a close collaborator with NASA and a professor of engineering, we could build structures on Mars using materials from Mars. Behrokh Khoshnevis has developed award winning 3D printers, as well as processes for 3D printing that would allow pioneers to Mars to print large structures within a day, using materials commonly found on Mars. The largest obstacle to this would be sending robots to assemble a power grid to supplement the colony and printer, as well as shipping the printer itself. The cost of moving any materials, as well as personnel would be astronomical, “Mars One estimates the cost of bringing the first four people to Mars at US$ 6 billion. This is the cost of all the hardware combined, plus the operational expenditures, plus margins. For every next manned mission including hardware and operations, Mars One estimates the costs at US$ 4 billion.” However, this cost is inexpensive when considering that colonizing Mars would be one of the greatest steps in progressing scientific discoveries.

Dear Raymond,
I am intrigued by your post because terraforming Mars can be viewed as an escape route or plan B in case our own planet can no longer sustain life. One thing you said that stands out for me is: “As of right now, we have the capability to offer people a one-way trip to Mars, the closest, possibly habitable planet.” I disagree with this sentence because it has been scientifically proven that Venus is closer to Earth and that Venus offers a more sustainable and feasible option in terms of terraforming for human colonization.Venus’ atmosphere is thicker and therefore we can create a magnetic field whereas Mars barely has an atmosphere which will cost more to create and sustain one. Also, Venus is considered our sister planet due to its similar mass and surface gravity which makes it the perfect candidate for human colonization.
Regards,
Huong Nguyen

Raymond, this is quite an interesting post. However, you focused on the technology, and money needed – I’m interested to think how you would imagine a society would develop, as you say, ” almost completely independent of the home planet for long durations”. Would it be militaristic? Exploitation-oriented? A vacation resort for the wealthiest or a planet-sized industrial sector?

I would really like to read what further thoughts you have about exploring planets like these, and what form the colonization may take. Thanks for your post!

I agree that Mars is the next step for human expedition and science. Simply getting to the moon was an enormous feat for human kind and now that we posses all the technology to reach Mars, I think that it would be foolish to not capitalize on such an immense opportunity. In terms of cost, the amount of money it would take to go to Mars is surprisingly small. If your figure is correct, then going to Mars would be half the price of creating the latest and greatest aircraft carrier. According to an article by Cnet, the USA’s newest aircraft carrier costs $13 billion.

I am very satisfied with your essay because you show a lot of interesting facts about going on a journey to Mars. I agree with you because we can turn Mars into a second Earth. It is a matter of time before we can make another home for our planet.

One thing you said that stands out for me is “a close collaborator with NASA and a professor of engineering, we could build structures on Mars using materials from Mars. Behrokh Khoshnevis has developed award winning 3D printers, as well as processes for 3D printing that would allow pioneers to Mars to print large structures within a day, using materials commonly found on Mars”. I think it is interesting because you show a lot of good detail and good theoretical views on a plan to a new life.

Dear Raymond,
I am satisfied with your post. You explained the facts well and gave excellent examples. It is hard to explain why one believes that humans will move to other planets due to whatever reason it be, with actual facts because of how many sceptics there are in this society.
One thing you mentioned in your post is “All of this would not be possible, if we did not have a certain resource: humans.”, when mentioning resources, many only explain the natural resources that are found here on Earth, such has water, metals and food. But I like how you mentioned we wouldn’t be able to move our people to Mars without something as simple as using our power as humans.
Regards,
Emily

Dear Raymond, I really enjoyed your post, it was full of details and many facts that helped me learn more about this journey to Mars, you provided facts from websites, etc. Great post.