Can E-sports Be Mainstream? The Answer: No….Not Yet.

Home Can E-sports Be Mainstream? The Answer: No….Not Yet. 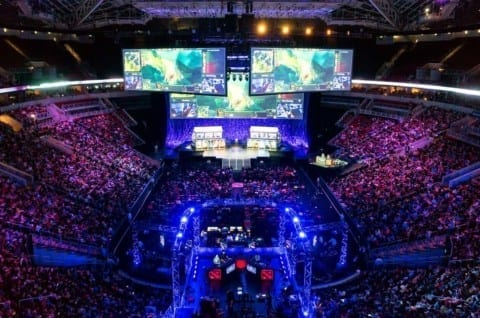 As thousands of fans descended onto Seattle’s Key Arena this August to cheer on their favorite teams, millions more tuned in from home through streaming websites such as Twitch and YouTube. The teams were not competing in a typical sport, instead the “athletes” were gamers playing a battle strategy game called Dota 2 in one of the most prestigious gaming tournaments ever: The International 2017. A few years ago this notion of people playing video games professionally, for money, would have been scoffed at as a nerd’s hopeless daydream. But the situation has rapidly changed, video games are now a massive subculture, so the idea of people competing in games is no longer so exotic. For the members of Team Liquid, a top competitor in the Dota 2 tourney, their love for the game has become more just a casual hobby. The International comes with a staggering $24 million dollar prize pool, with a $10 million grand prize (“The International” 1). The record setting numbers are impressive, but they will be shattered soon as E-sports industry continues to grow attracting more and more attention from big name companies and the general public. Many enthusiastic video game developers are beginning to see the potential in this rising niche, and are beginning to create games specifically designed to become an E-sport, hoping to be the next Dota 2, League of Legends, or Counter Strike.

Despite the competitive nature of video games, E-sports is a very recent and new phenomenon. Arcade and console era games were fun to play with other people, and many players did become ridiculously skilled, but it was logistically difficult to gather a group of competitors and host an event. Technological improvements for PCs and Wi-Fi in the early 2000s slowly changed that, allowing people to play with each other online through the Internet, removing pesky face-to-face social interaction. Starcraft: Brood War and Warcraft III, both created by the industry behemoth Blizzard Entertainment, quickly became pioneers of competitive gaming. Both games had easily understood objectives: defeat the enemy by controlling a large pixelated army and expertly managing resources. They also an online leaderboard and extensive online forums for people who were ready for more high level competition and commitment. Tournaments began to gain popularity especially in China and South Korea, where people were already beginning to make money off playing video games. By the end of Brood War’s decade long run as the most popular game in East Asia it had awarded a total of $4 million dollars to competitors. Its success paved way for other real-time strategy games, like Dota, Defense of the Ancients (a mod of Warcraft III) and League of Legends, and other genres of games, like first person shooters and fighting games, to become E-sports.

So E-sports is growing. But will it ever break into mainstream culture? According to the New York Times’s Mr. Nick Wingfield the competitive gaming world is reaching critical mass: “the signs of success already mirror the achievements of major sports. Game tournaments sell out giant arenas…Madison Avenue’s highest flyers, like Coca-Cola and American Express, have lined up sponsors…and top players earn six-seven figure incomes”(5).  Although the astronomical growth over past decade has been undoubtedly impressive, from $500 million in 2016 to more than $1 billion opportunity over the next three years, E-sports will never become a “thing” that people will tune into and watch every Saturday for several months (Elder 3). There are just too many limitations for it to work.

Soccer is easy and straightforward to watch. There are no secret moves, no obscure win conditions, no imbalances, one can easily decipher the overall scheme of things. A person essentially has three abilities: move, pass, shoot. With such even playing ground it is clear to a viewer when one soccer player’s athleticism deserves praise, giving the sport much more traction with your typical non-gamer. Traditional sports tests one’s physical ability. E-sports to make up for the lack of physicality tests one’s knowledge of the game, meaning most competitive games are mechanically complex. While this is beneficial to players, allowing them to reach new heights of skill, it causes confusion for casual viewers For a newcomer, watching video games can be a nauseating experience. In Dota 2 there are some 115 characters to choose from, each with at least 4 unique abilities. In a game with 10 of these characters running around fighting each other things can get extremely chaotic. The commentary tries to sort through the mess, by using technical lingo only people well versed in the game will understand.

Another huge limitation is the negative press attention most video games have in public. Every year numerous “studies” have been published “showing” a link between violence and video games. While these studies have been widely discredited the media and other groups are keen to point out the graphic violence in video games and often use it as a reliable scapegoat for serious circumstances (Toppo 3; “Violent Video Games” 1). Associated with video games often the image of the typical socially awkward high-school nerd, polls showing the average male gamer to be 35 proves this stereotype to be completely false (Frank 2). Yet there is still anti-nerd stigma in the general public (check the comments on the NYTimes article). The majority of the country has yet to warm up to the notion of professional gaming, and some are downright hostile to it. The truth is E-sports will never appeal to the middle aged man content with football, but it will continue to attract people who care: people part of the gaming subculture.

Ultimately the pursuit of become the next NFL is a wasted effort. The is no need to artificially force video game onto people who simply do not care, when there are millions waiting to watch the next big event. This quest is unhealthy for the gaming industry, as companies are diverting focus away from the game itself, polishing it to make it even better competitively, and, instead, focusing on advertising and promotion which will never pay off. Players bear the brunt of the neglect having to deal with stagnant metagames, toxic communities, and bugs and glitches. Perhaps one day video games will become such an integral part of our lives that E-sports will finally become a weekend sensation, but until then the industry needs to focus on what really matters: the people already playing and watching their games.

When we read your article, “Can E-Sports be Mainstreamed,” we were extremely interested because we all like video games. We think e sports could be mainstreamed in the future. People are starting to go to tournaments for it and winning money. They can make it into a full-time job if there good and winning all the money. Some games like fortnite allow you or make you use your brain. You also make more than the average person if you are winning some big tournaments and getting money through sponsors, YouTube, and twitch. We thought that one sentence really stood out to us and that was ” The international prize pool is a staggering 24 million dollars” That stood out to us because we all like gaming and that’s a lot of money to be making just for gaming.

Kevin, this is a very interesting topic. I think this industry is one that deserves to be looked at because gaming and sports are so different since sports rely heavily on natural talent while skills with video games are something that can only acquired through playing a lot, along with maybe some natural intelligence and strategic skills. I also fully agree with your final point, that the gaming companies need to just focus on the games. Advertising is useful but it is not what is going to bring more success because if the advertising makes the game seem too fake and cheesy (as I often experience with games I play) then the real players may get annoyed and the games would lose their base skill and talent and it would just be less fun to watch. It is a tricky thing for these industries to try and figure out, the line between spending time on advertising or improving the game for people that are already a part of the community.