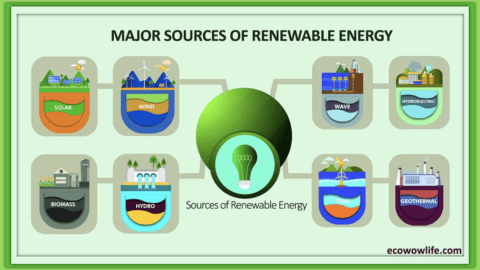 With the increasingly large issue of climate change, environmental scientists and many others are emphasizing the need for more renewable energy sources in the world. The use of fossil fuels is an outdated and environmentally harmful way to produce energy. Many believe that we as a global community can shift our energy production to solely renewable resources, getting rid of fossil fuels completely. However, others are skeptical of the efficiency and productivity of these renewable resources, claiming that they will be unable to create the same amount of energy as fossil fuels. After researching a number of articles written on this issue, I have come to the conclusion that renewable energy sources can completely replace fossil fuels, however it will take worldwide participation/effort and lots of patience.

In an article written by Steve Cohen, the author explains how although the transition will be slow, movement towards renewable energy will happen. He claims that as younger generations move into positions of power the switch will happen because younger generations have grown up in a world of change, and therefore are comfortable with change even on large levels. In addition to this, Cohen touches on the economic concepts that come with this switch. He explains that people are willing to explore these alternative energy sources because fossil fuel is so “plentiful and cheap”. Also, for the energy that most of these renewable sources produce, they are relatively inexpensive. Overall, Cohen believes that, although it will be a process, society’s new generations of change will successfully replace fossil fuels with renewable energy.

In another article on this topic, Drew Desilver is less optimistic about switching to 100% renewable energy. He states that although 77% of Americans believe that we should use more alternative energy sources, the rapidly growing amounts of renewable sources we have “accounted for less than 4% of all the energy used in the U.S.” . Although the US today relies very little on foreign energy sources by increasing domestic production, most of this energy still comes from fracking and horizontal drilling, which are very harmful to the environment. Desilver’s main point is that the use of renewable energy sources is increasing drastically, but we still have a very long way to go before it can completely replace fossil fuels.

In conclusion, the possibility of renewable energy sources completely replacing fossil fuels are high, but this will not happen overnight. Especially, in the world’s current situation of rapid climate change, we must come together to make these steps toward alternative energy. Replacing fossil fuels with renewable sources is a long-term project that requires cooperation all around the world, but it can be done.

Dear Zoe,
I agree with your argument that renewable energy has potential to replace all fossil fuel energy and I was interested by you comments about the outdate nature of using fossil fuels. You stated “ The use of fossil fuels is an outdated and environmentally harmful way to produce energy,” and I could not agree more with such a claim. With all of the advancing technology, there is no excuse for not constantly striving to convert over to renewable energy. With taking AP Environmental science this year, I understand the vast array of actions that require energy, and how human interactions with the environment are completely reversible, however we must still make efforts to slowly eradicate the use of fossil fuels. An article written by Perdue University scientist Maureen McCann (https://www.purdue.edu/newsroom/releases/2020/Q2/can-renewable-energy-really-replace-fossil-fuels.html) dives into how she has been studying how we can use plant power and biofuel as a reliable, renewable source of energy to replace fossil fuels. Taking a look at this article would give you more points that could further your argument and provide one of many solutions to how we can replace fossil fuels. Thank you for taking the time to write about such a topic, and I look forward to what you write next!