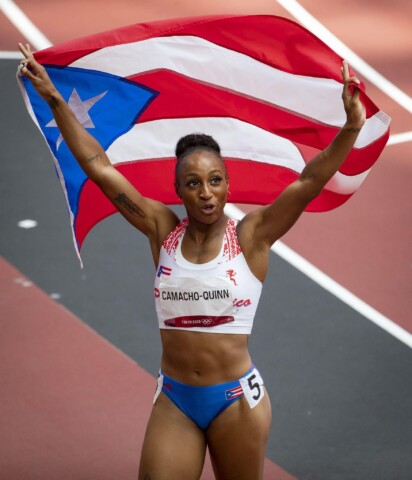 In the article, “Camacho-Quinn Wins Gold” (McGraw Hill) I learned about a female olympian who set the olympic record for her event, won gold for Puerto Rico, and was disqualified at the olympics in 2016.  Camacho-Quinn was born in South Carolina but chose to run for the Puerto Rican olympics to honor where her mother is from. In this year’s Olympics, Camacho set a historic record in the women’s 100-meter hurdle semifinal run. Her win became Puerto Rico’s first gold medal in track, second gold for the island and tenth medal in all.  This victory definitely showed how strong she bounced back from her 2016 olympic race where she was disqualified. Her disqualification was due to hitting two hurdles and stumbling over during the event.  Her family says that they think it was because of that race (2016), that she tried so hard for what she won this year and how she exceeded herself.

I think it’s very inspiring how even though she was disqualified in 2016 she didn’t stop trying and working for her win.  With all the hard work she put into her race, I’m positive she is very happy with and for herself. I remember when I was younger and I did track and I didn’t go to Valley I was sad and upset with myself for not getting to where I wanted. Then, the following year, I still did track; I did long jump and because going and placing in Valley was still my goal, I tried my best and I ended up getting 5th and that’s something that will stick with me for the rest of my life and I’m sure it’s the same for her, just much bigger. No matter how many losses you take, you can ALWAYS come back from it and show yourself that you can do it all it takes is practice.

Have you ever taken a loss that made you go above and beyond for the next chance you got to accomplish it?