Calling for Respect and Equal Treatment 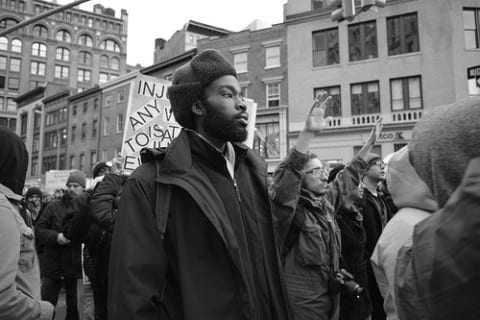 I believe that Black lives matter in our world because we are all the same on the inside. Just because people look different on the outside, that doesn’t mean that White people should get more respect than Black people.

Black people are getting shot by policemen just because they are Black. You can make a big change if you make a law that everyone gets treated equally maybe your supporters will respect you more. I think that the life of every person in this world matters because without them you would not be elected president.

You should also respect Black people because if you were Black, you would want people to respect you. I think that the color of your skin doesn’t matter. What matters is how kind you are. That is why I think that you should make a law that everyone gets treated equally in our world.

Chris,
this interesting question is a pretty hot topic in our country, for one I think that your simple and easy stance is also the most correct and fair, the fact of this whole matter and the issue with this entire debate is summed up simply in your sentence by saying everyone deserves to be treated fair and equally and this whole thing is just as simple as that.

I agree with you Chris every person should be treated with the same respect regardless of the color of their skin. The next leader will have to deal with the civil unrest in this country and must be an advocate for the African American community.

I completely agree with this Chris. A person who is going to lead this country must be able to put him or herself into the shoes of the most discriminated against people. Equality has to come into view again. people like Rosa Parks, and Martin Luther King Jr. would be disappointed in our ways today. Equality has to be a priority of any leader of the country.

Chris, I think this request for our future president to respect people of all races is very valid, but i wish it wasn’t necessary we live in the 21st century, we have over come so many obstacles and i think it’s truly awful that racial discrimination is still a problem. i also agree with lula, we need to refine our justice systems and not let these killings and other brutalities be justified.

Dear Chris,
I cannot agree more with you. I think that we as a society and the next future President need to take steps towards treating everyone equal and fair. I also like how you stated the color of your skin isn’t what matters, it’s what is on the inside and your personality traits that matters. I would like to know your thoughts how the future President can work towards making black lives matter as well as making as equality law. I would like to say again that I really enjoyed what you had to say.

Chris,
There is an important question to ask; what is the fundamental cause of inequality? If you are familiar with Marx’s and Robert Reich, you would most likely come to the conclusion that that the root cause of social inequality is economic. There is, without discordance, a noticeable and most of all disturbing problem of racial inequality. But, we cannot combat inequality with moral based legation. Inequality is fundamental to capitalistic economies, and if we truly wish to limit or remove inequality from society, we must make it our directive to fundamentally reform or eliminate capitalism.
It is my aspiration that I have giving you a new understanding to inequality, but take my assertion lightly, for I am a fairly wealthy white male who has no stake in racial inequality.

Dear Chris,
I agree wholeheartedly that equality is something the next president needs to work hard to achieve. The movement “Black Lives Matter” is gaining rapid momentum and is really changing the justice system. Do you have any suggestions on how the president should go even further towards equality? Also, as to your last statement about laws that everyone is treated equally, that is already in place. It is just a matter of enforcing it. That being said, do you have any suggestions to following the human rights laws set force for all nations? All in all I liked what you had to say about the importance of respecting all life, no matter the color of skin.

Chris I agree with your post it is really important that everyone gets a chance to live even if they are different colors. I like how at the end you said that if your were black you would want respect. It will really make people see how important this issue is.

Chris I share the same view as you in that the next President of the United States needs to fix the racial inequality that is currently happening. Police Violence towards African American in the United States has increased by a large percentage since 2015. For example, in an article titled ” Police Killings Rise Slightly, Though Increased Focus May Suggest Otherwise,” by Michael Wines and Sarah Cohen on the New York Times it is said that ” Since 2009, one regular if incomplete measure, the F.B.I.’s account of justifiable homicides by police officers, ranged from 397 to 426 deaths annually before jumping to 461 in 2013, the latest reporting year.” I can’t help but ask if all of these killings were truly justified. Chris, I believe the only way the U.S can help eliminate police killings of blacks is to first decrease police brutality. The federal court and its judges need to reform their trials on police officers and investigate to find out the justifications of police killings.