California Poised to Overtake Germany as World’s No. 4 Economy

Home California Poised to Overtake Germany as World’s No. 4 Economy 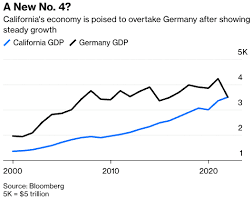 In the article, “California Poised to Overtake Germany as World’s No. 4 Economy” (Bloomberg, Winkler, 2022) I learned that California’s economy is constantly growing, competing with other countries while only being a state. California outperforms the US and the rest of the world across many industries in the economy. This US state has a corporate revenue of 147%, while Germany’s is just 41%. California was even labeled as the “conveyor belt for talent”. California’s firm revenue rises 8% as they turn $100 of sales into $$49 of profit, also increasing employment by 10%. Germany’s revenue increased by only 4%, generating $44 of profit from $100 sales. However, their workforce has decreased by 2%.

I think California can easily become its own state and be able to compete with other countries. Even after suffering from the pandemic and current inflation, it continues to grow its economy ever so slightly to reach the California dream. I think in a couple of years, California’s economy itself will outperform Japan next, which is ranked World’s No. 3 Economy. I am even proud to be from California.