My Brother the Artist, at Seven by Philip Levine, read by Rojo

Home My Brother the Artist, at Seven by Philip Levine, read by Rojo 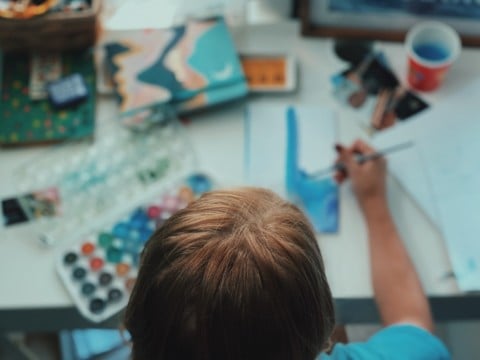 Youth Voices
My Brother the Artist, at Seven by Philip Levine, read by Rojo

I chose this poem.  Or, rather, it chose me.  My first impression of this poem was that it was very detailed.  The poem engaged me, yet, at the same time, made me anxious .  A line that particularly makes me feel engaged is, “How much can matter to a kid  of seven? Everything. ”.  Anxiousness arises for me when I read the lines, “As a boy he played alone in the fields  behind our block, six frame houses holding six immigrant families, the parents speaking only gibberish  to their neighbors.”.  This could be because Its a little bit gloomy and a very real situation.

What I know about the situation – what’s happening in the poem – is that theres am kid in a n immigrant family that really likes art . What I know about the speaker is that they are the kind of person who is very curious and shy  about everything.  This is suggested by the words “ Little wonder he learned early to speak to himself, to tell no one what truly mattered.”.   The speaker seems to be documenting the kid and the family..  I say this because its not the family writing the poem its someone else thats not part of the family..  The poem springs from maybe the1900.  The poem revolves around several themes, including childhood and destiny.

If this poem were a question, the answer would be “do what you want”.  If it were an answer, the question would be “should you do everything determinedly?”  The poem’s form is a dramatic monologue .  This form is a vehicle for the content of the poem.  If the poem were, say,  a couplet , it would not guide me toward an understanding of its meaning.

My Brother the Artist, at Seven

As a boy he played alone in the fields
behind our block, six frame houses
holding six immigrant families,
the parents speaking only gibberish
to their neighbors. Without the kids
they couldn’t say “Good morning” and be
understood. Little wonder
he learned early to speak to himself,
to tell no one what truly mattered.
How much can matter to a kid
of seven? Everything. The whole world
can be his. Just after dawn he sneaks
out to hide in the wild, bleached grasses
of August and pretends he’s grown up,
someone complete in himself without
the need for anyone, a warrior
from the ancient places our fathers
fled years before, those magic places:
Kiev, Odessa, the Crimea,
Port Said, Alexandria, Lisbon,
the Canaries, Caracas, Galveston.
In the damp grass he recites the names
over and over in a hushed voice
while the sun climbs into the locust tree
to waken the houses. The husbands leave
for work, the women return to bed, the kids
bend to porridge and milk. He advances
slowly, eyes fixed, an animal or a god,
while beneath him the earth holds its breath.