Breaking Tradition on Inauguration Day at the National Mall

Home Breaking Tradition on Inauguration Day at the National Mall 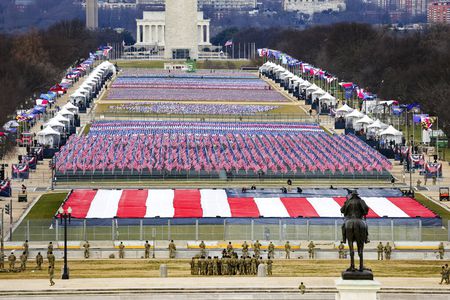 The National Mall in Washington, D.C. is not just the location of the March on Washington for Jobs and Freedom as my previous article talked about. Designed in 1791 by L’Enfant by the orders of George Washington, the National Mall “represents the American character and our democratic experience to the world more than almost any other image of our country” (pbs.org). The National Mall lays in the heart of the District of Columbia and symbolizes the country’s journey to freedom and all it stands for today. Normally on Inauguration Day, thousands upon thousands of people gather here to watch the new president sworn in surrounded by everything America represents. However, this year broke the centuries old tradition due to the pandemic and security reasons.

On January 20, Americans had to watch the streamed version of this historical day. Because of the recent riot at the capital, instead of supporting the new president in person, individuals had to stay home, and the National Mall was closed to the public due to “the safety and security within the area of the National Special Security Event designated by the Department of Homeland Security for the 59th presidential inauguration” (CNN.com). Instead of the normal traditions, a “Field of Flags” filled with over 200,000 flags was put in place to represent the absent attendees of the inauguration. To make up for the closed down National Mall, “The Presidential Inaugural Committee lit the Field of Flags with 56 pillars of light on Monday night, representing each of the 50 states and U.S. territories. The pillars lit up for 46 seconds — for the 46th president of the United States, Joe Biden” (CNN.com). Amidst a pandemic and security threats, America still sought to create a solution to an inauguration day that would go down in history. In front of these flags, Joe Biden, the 46th president of the United States, declared to create a better future for America, united as one in the values of freedom, justice, and equality.