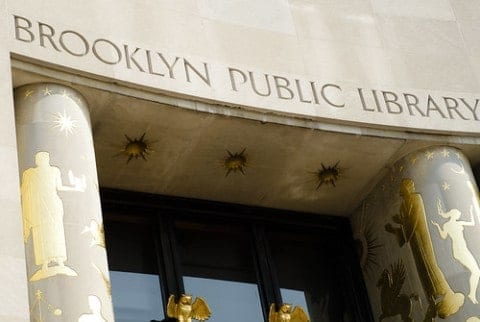 I would like to say thank you to all of you in attendance today.  I want to acknowledge the other scholars here today; the teachers and administrators, community members, Brooklyn Library staff and programs. I especially want to thank my principal for allowing us to participate in the Brooklyn Connection Program.

Our project is “The Civil Rights Movement in Brooklyn”, a quilt that outlines the grassroots movement in Brooklyn, New York.  In our Race & Social Justice class, we learned about and researched the Civil Rights Movement – both nationally and locally. With the assistance of the Brooklyn Connections Program, we researched and found out the significance of “Grassroots Movements”. Grassroots Movements are a type of movement or campaign that attempts to mobilize individuals to take some action to influence an outcome, often of a political nature seeking to make a change, both socially and politically.  Our research led us to investigate how effective the local Civil Rights Movement was, as well as, how effective any new campaigns should be.

We learned about a book entitled Sweet Clara and the Freedom Quilt by Deborah Hopkinson.  A book about a young slave girl who used quilting to guide slaves during the Underground Railroad.  We learned that quilts were used to tell a story – family histories, marriages, birth, and deaths. After learning about quilting and being inspired by famous African-American quilters like Harriet Powers, our class decided that for our project, we should make a quilt of the Civil Rights events and protests that occurred in Brooklyn. Our class researched and collected historical information from the archives and the internet to bring this vision to fruition; Events such as the protests against Ebinger’s Bakery, Operation Cleansweep at Borough Hall, The Bibuld Family’s struggle to integrate schools.  In addition, we learned about the Brooklyn Schools boycott including the Ocean Hill-Brownsville teachers’ strike and the Employment discrimination at SUNY Downstate. We looked through newspaper archives dating back to the 1950s and 1960s, looked at ephemera, and other historical documents that gave us a general idea about what happened in these events. Ms.Julia, our Brooklyn Connections Educator, was a great help to us. She came into our class and taught us about research strategies and helped us with everything that we did; she gave us plenty of resources and materials that guided us through our quilting journey.

As I reflect on this experience, we learned new facts and dispel many myths, for example, Claudette Colvin, a teenage girl who refused to get up from her seat on the bus was arrested prior to Rosa Parks but was excluded from history because she was pregnant out of wedlock and would not be a good representation of the movement. Also, Bayard Rustin, an LGBTQ community member who was very instrumental in coordinating the March on Washington but yet we never heard of him. Its as if he was wiped out of history because he was openly gay. Before this class, we only focused on the mainstream historical narrative of African-Americans’ history and struggle in this country.  The Civil Rights Movement was watered down to Martin Luther King’s I have a Dream speech during the March on Washington, DC. Society would have us thinking that King’s dream was fulfilled but our research showed up that it hasn’t been. As far as Education, We are experiencing the same issues today in 2019 – segregation, unequal facilities, and resources, not to mention unfair disciplinary practices. The dream has not been achieved. But What happens to a dream deferred? Do we get a new dream? Do we forget about it? Or do we use our education and our voice to initiate another grassroots movement but this time maybe we should focus not on “Civil” rights for Black people but on the Rights of Human Beings?

I love the points made in this article and the response made by Robyn – wow. Some deep though exhibited here!

Dear Nathaniel,
I am excited with your post/speech entitled “ The Rights of Human Beings: Brooklyn Public Library Convocation Speech ” because I loved your interest and clarification of balck civil and human rights in relation to public libraries.

One sentence you wrote that stood out was your last sentence “Or do we use our education and our voice to initiate another grassroots movement but this time maybe we should focus not on “Civil” rights for Black people but on the Rights of Human Beings?” I think ist was powerful and brought back several of the strong points you had made earlier in your speech.

Another really well written sentence was “ As far as Education, We are experiencing the same issues today in 2019 – segregation, unequal facilities, and resources, not to mention unfair disciplinary practices. The dream has not been achieved.”
This really stood out because we see segregation and exclusion as things in the past tense/. Not something that happens in a cooperative modern day society. But it does happen even if we don’t consciously or unconsciously realize it.
Another thing I like is how you brought it back to not being wiped out of important parts of history for being black or any other race but also being LGBTQIA+ which I think is also important because they also feared many of the same treatment.

I look forward to seeing more of what you write because I feel we share the same views and your delivery was phenomenal.

Hey! This is sort of unrelated to the topic, but we’re discussing a problem we have with our library here in Back of the Yards College prep in Chicago. The city took our school library and turned it into a public library after the previous public library broke down. We’re one of the few schools in Chicago that don;t have their own library and we want to do something that helps us get our library back. If you have any ideas on how we can bring more awareness to this issue, please us know! Thank you!