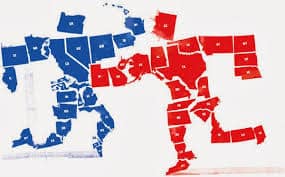 I added the book Why We’re Polarized by Ezra Klein to my Amazon list months ago after it was quoted in Pete Buttigieg’s book Trust. I usually read fiction but Dr. Sloan requires us to read a nonfiction book in class. His independent reading time gave me the perfect excuse to start Klein’s book.

I am only about 1/3 of the way through the book but I am loving it and very much looking forward to finishing it on the place to my upcoming NYC visit.

Klein examines the political psychology of group dynamics. He breaks down party identity, the rise of conservatism, partisanship, sorting vs extremism, mega identities, and us vs them mentalities. He makes it very clear in his introduction that this is not a book about people, it is a book about systems. It is a book that will hopefully shed some light on the senseless scene of our current political affairs and give the reader a greater understanding of the political framework in America.

Klein does all this in the same casual yet informative tone of his Vox articles or his podcast “The Ezra Klein Show.” While talking about political systems, he manages to break things down to the basics for the average reader and even adds in a little humor. For example, when talking about using fear of the opposing party to motivate a political base, he says “That’s why fundraising emails often border on apocalyptic (a few of the recent subject lines in the emails I’ve received from the Republican National Committee, int support of Trump’s re-election campaign: “FAKE NEWS! AMERICANS MUST FIGHT BACK!” and my personal favorite, “FW: STOLEN?” – caps lock in the original of course) (pg. 64).

For anyone who has turned on the news and thought to themselves, “What the hell is going on?” Ezra Klein’s book will help untangle the mess that is the American political landscape and finally answer some of your questions about American polarization and how we got to be where we are.