Book Review: Tattoos on the Heart: The Power of Boundless Compassion

Home Book Review: Tattoos on the Heart: The Power of Boundless Compassion 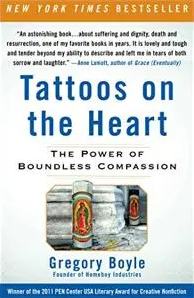 Tattoos on the Heart: The Power of Boundless Compassion by Greg Boyle, is a book that falls under the Christian Literature genre. Boyle has won many awards not for writing this book, but for what he does that he wrote the book about. The awards were the Civic Medal of Honor from the Los Angeles Area Chamber of Commerce, the California Peace Prize granted by the California Wellness Foundation, the Lifetime Achievement Award from MALDEF, and the James Irvine Foundation’s Leadership Award. He was named Humanitarian of the Year by Bon Appetit magazine in 2007. He was inducted into the California Hall of Fame in 2011. He was awarded the honorary Doctor of Humane Letters from Whittier College in 2014. Then he won 2016 Humanitarian of the Year by the James Beard Foundation. There are a few more awards that he has won all for his dedicated service to his community. Anyway, back to the context of the book. This book is about the organization that Boyle created to help provide jobs, job training, and encouragement to young gang members so that they can work together. And learn the mutual respect that comes from collaboration. After reading this book, I thought it was a pretty great read but it does get pretty repetitive. To me, it almost seemed like the same thing was happening in every chapter but in different stories. The book definitely has a great meaning behind it.

Father Boyle was a preacher in the Dolores Mission Church in one of the poorest, if not the poorest, parts of the city of Los Angeles. He discusses the amount of gang violence that he witnessed. That’s what he based the book Tattoos on the Heart: The Power of Boundless Compassion on. He explains the interactions he has had with all the youth and gang members over the years. He sets this book up so that each chapter is a new interaction that he has had with either current or former gang members and explains what he learned from that experience. A theme that shows up a lot in the book is this idea of kinship. “You stand with the least likely to succeed until success is succeeded by something more valuable: kinship. You stand with the belligerent, the surly, and the badly behaved until bad behavior is recognized for the language it is: the vocabulary of the deeply wounded and of those whose burdens are more than they can bear.” He explains how important connections are in this book. Everybody needs somebody that they can rely on, trust. He also focuses on how we should live like God. We need to show compassion to each other to better society. “Compassion isn’t just about feeling the pain of others; it’s about bringing them in toward yourself. If we love what God loves, then, in compassion, margins get erased. ‘Be compassionate as God is compassionate,’ means the dismantling of barriers that exclude.”

I believe that this book has some great meaning and it’s one that everybody should read. The themes in the book are things that we should learn as a society and I think it’s great to hear the stories of those that were struggling or are struggling with gang involvement. He focuses a lot on connections, compassion, and love for others. The only issue I have with the book is that almost the same thing was talked about in each chapter. This book is really one of those that you have to pay close attention to in order to really see the difference in the chapters but once read closely, is a terrific book.

This is a great book for all to read. When reading this book, make sure you really understand the point of each chapter. That will really help you get the most out of the true meaning of what Father Boyle wants us to get out of it. Overall, it is a great read and it is cool to hear the stories that he tells about his interactions with the gang members.

You gave a very accurate description and analysis of the book, one that matched my own. I’m on page 60 and I’m considering not finishing it because it is very repetitive. Like you said, it has a lot of powerful themes and good morals, but the stories are too short to really make an impact. There are so many small stories, each with powerful themes, that the reader is overwhelmed. (The overall book might have been more powerful if there were a few, longer stories). That is just my interpretation of the first 60 pages. Of course, what Greg has done is incredible, so I think you did a great job on your summary.

Kyler,
After reading your post I really saw how you took the time to actually read through the book and get a understanding of it. I agree with you on all the points you made through out the post. Such as, when you said in your second paragraph that this book really is great. It has a lot of symbolism and it’s cool to know that you understood and saw the signs. Great review.

Kyler,
I love what you wrote about this. I totally agree with everything you said. When I heard that we were reading this book in religion, Ill be honest, I was not excited, but this book turned out to be way more interesting than I could have imagined and I think everyone should read it.