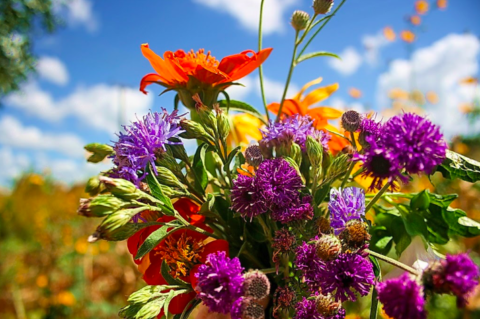 The flower, sometimes known as a ‘bloom or blossom, which have been adored and admired by humans to bring beauty to their environment, and also as objects of pure romance, medicine, ritual, religion and even as a source of food’. These plants, of various colorful appearances that symbolize many things, are even a favorite among many worldwide artists as well, such as ‘Van Gogh’s sunflowers series, or even Monet’s water lilies’. Surprising as it may seem to some or a bigger sum that just ‘some’ flowers can actually improve your mental wellbeing too, there has been research found that have indicated that flowers have a long-term positive effect on moods after being exposed to flowers on a regular basis.

Flowers being used not only as a ‘way to improve one’s mental wellbeing, but also in medicine around the globe’, whether they are turned into oils, herbal tea mixtures, and in addition, have been found in many different skin care products. Over the years there have been more medicinal substances founded that have included flowers in some sort of way, commonly seen in herbal tea blends, and essential oils, which have been found to being very effective when used, ‘they can cure/treat such things as fevers, constipation, headaches, stomach pains and more down the line’.

Whilst throughout the history of art, ranging with inspirations from things such as cats or even cupid, at the forefront of ‘muses’ there are flowers. ‘Reaching all the way back to the Ancient Eqyptian where the lotus flower would symbolize the sun and had strong ties to the concept of creation and rebirth’. ‘Medieval times, The Renaissance, and the eras that occurred up to the present time have used flowers in art to portray beauty’, or symbolize certain emotions, all determined by the artists choice for the piece. The many founded ways flowers have been used in life throughout the decades have been exquisite and fascinating, showing that something as simple as a plant that we use in occasions like weddings, or even as gifts, has portrayed many various uses, for art, medicine, and improving one’s mental wellbeing.

The sentence that stood out to me from your text is “Over the years there have been more medicinal substances founded that have included flowers in some sort of way, commonly seen in herbal tea blends, and essential oils…”. I think this is very interesting how a beautiful plant such as a flower can be used for health benefits.

Thank you for your writing, I can’t wait to read what you write next. I like how detailed you are along with the topic you chose. I hope to see you continue telling such radiant information and facts.

Dear Kate,
I am thrilled by your post, “Blossoming Genius,” because it was very interesting to find out about these symbols that flowers had and their history to it as well. It was great to know that flowers had many uses for both mental and physical health.
One sentence that stood out to me is: “Over the years there have been more medicinal substances founded that have included flowers in some sort of way…” I think this is very intriguing because I would like to see medicines be natural in a sort of way. Knowing that natural base medicines have mostly contained flowers is something that can actually change the way people see flowers.
Thanks for your writing. I look forward to seeing what you write next because I think this topic should be shared with others to see the importance of flowers. I would like to see more depth in the history of these flowers.
Jennifer Mendoza

Dear Kate,
I am fascinated by your post because of the captivating and informative way you described the various uses and symbols tied to flowers throughout history. Flowers are often an indication of beauty, health, healing, renewal, and power, as you explain. It’s an important reminder, then, to recognize that the colorful plants are genuinely good for our mental wellbeing.

One thing you said that stands out for me is “ there has been research found that have indicated that flowers have a long-term positive effect on moods after being exposed to flowers on a regular basis.“ I think this is pure and a beneficial fact to know because of the simple remedy that it provides, applicable to numerous scenarios. Flowers carry with them not only an indication of happiness and celebration, but essence of the earth itself. The air and elements of the earth around us provide what we need to survive, so why wouldn’t flowers help do the same?

Your post reminds me of something that happened to me. Once, I got a plant while roaming through stores with a friend. I thought it was beautiful, and I liked the idea of taking care of something and watching it grow. As it did just that, it genuinely did improve my state of mind, as the study claims, and it was a reminder of the life that exists out of our daily preoccupations.

Thank you for your project. I look forward to seeing what you write next because I really enjoyed your elaboration on one of life’s simplicities. I also appreciate art history and mythology, and I loved your inclusion of those elements in connection to the flower. The voice in your writing is artful and vivid, and I’d be happy to read more.