How Selena Quintanilla Valued Her Nation, Culture, and Traditions

Home How Selena Quintanilla Valued Her Nation, Culture, and Traditions 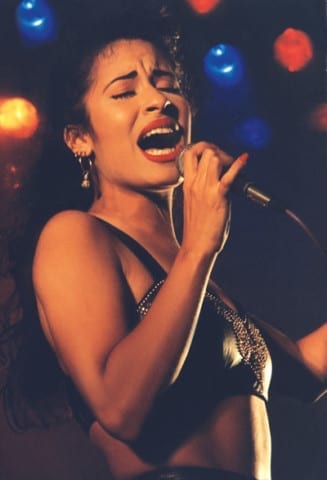 Like many citizens of America who value and think highly of their country, Mexican Americans are the same. They value their nation, culture and traditions. Mexican culture is a combination of many influences handed down as earliest as the mesoamerican civilization to the diverse population today. Because so many people of different backgrounds live in the United States, multi-background citizens are not uncommon. Selena Quintanilla Pérez being one of these people, born and raised in the United States with Mexican American roots. Despite Selena’s difficulties as a Tejano woman, her music, and legacy showed others her own self identity.

Selena was known for singing a genre of music, “Tejano” which fuses Mexican, European, U.S. influences together (britannica). “Tejano” literally translates to “Texan”, which is very fitting because Texas is the origin of this music (Ilich). Thousands upon thousands of musicians have used this specific type of music. Tejano music is not only popular, but also rich with history.

In 1989 Selena joined EMI records, a major record company. The head of the company, José Behar had high hopes for Selena. He saw her as the “next Gloria Estefan” a Latina artist who wasn’t bound by any language or genre (Chavez). José Behar also knew that she could appeal to a greater audience, not just Tejano fans. In 1991 her song “Buenos Amigos” became number one on the billboard, making her known in the United States and a wider audience (Chavez). Her growing fame expanded to the whole United States, Central American, South America, and even Asia.

Selena became eager to make an album in her first language, so she would become successful as some of the artists she was being compared to, for example, Madonna and Mariah Carey. Selena began recording English language songs and continued performing.  In 1995, Selena was shot and killed by the president of her fan club, Yolanda Saldivar. Millions of people mourned her death, and thus the attention of her death gained her even greater fame. A year after her death her crossover album was released containing English and Spanish songs.

Her success in a male- dominant Tejano genre was a breakthrough for Selena, the genre of Tejano music became very well known. Selena helped popularize Tejano music among a broader and younger audience than it had previously drawn (Chavez). Through Selena’s music, and the legacy she was able to help the Latin community in American to come to terms with their Identity. Selena helped many Mexican American’s who were struggling with their bicultural life, to feel like they belonged somewhere.

Thank you for your post about one of the most inspirational people, the Mexican American Selena Quintanilla. Until this day after 25-26 years, she has been gone, her music is still played and inspires people. Her rise in the music industry symbolized leadership for Latinos around the world.

The Tejano superstar inspired, Christian Serratos who recently embodies Selena in the Netflix series, Selena Gomez, Jennifer Lopez. Did you know Selena Gomez’s named her after the song Como La Flor because they were such big fans? Across many social media platforms, people have said, “Selena showed me how beautiful it is to be Mexican-American and to be proud of it.” “She was magical and taught me you didn’t have to be stick-thin to be beautiful.” Her fans were her everything and the biggest influence on making music.

I personally love my name, because of her. I was not named after her but I was named for it to be easier for my Mexican American family can pronounce my name. Her legacy is forever lived, the queen of Tejano music. The demographic face of California changed for the first time in its modern history. Latios/Latinas have become the biggest ethnic group. They come to California for Opportunities that they did not have in their own mainland. recently vendors on the streets of towns selling corn, chips, shaved ice, are being beaten. Why? They are only trying to make a living like everyone else. How can we put a stop to this?