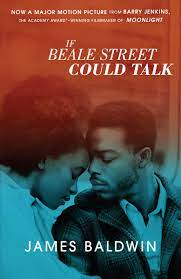 THe protesters are just standing there and the rioters are rushing the police. The protesters are holding BLM signs and the rioters are holding a baseball bat. On the left they are wearing street clothes and on the right they are wearing army gear. I wonder why the rioters stormed the capitol. Also I wonder why there is much more police in riot gear for just some black people but there is barely and police facing the trump supporters.

I think that in America if you are black you will be treated differently by law enforcement. I think that the police are there to protect people for the most part but the system they are in has systemic racism which causes bad things to happen to minorities.

I think that it connects to the fact that Fonny, a character in If Beale Street Could Talk, is treated unfairly.

I think that he is trying to say that color is not something we will hate somebody for on a human level it has more to do with politics.

I´m really impressed by your post, “BLM vs Trump Supporters” because its frustrating to see people with different color of skin tone being mistreated by the police but people that are white skin tone are not being harmed .To see the two different situation where people with different skin tone are just doing a protest and being harmed and being killed just by wanted to get equal rights but where its a different story for the white people that are storming in the capitol with baseball bats and police are not doing anything about it.

One sentence you wrote that really stands out for me is ¨ The protesters are holding BLM signs and the rioters are holding a baseball bat.´´ i think sad because i really don´t see why police are mistreated them and people with white skin are being treated like the rule everything .

Thank you for writing this amazing post.I´m really looking forward for your next post, becuase i reall like how you inculde detail from what is happen in this world right now

I am impressed by your post, the story that you gave about “BLM vs trump supporters” because you explain that the life is more oppressed than the right.

I am impressed by your post, “BLM vs Trump Supporters” because you explain how the left is more oppressed than the right who were openly raiding the capital without any harm done to them as peaceful protestors were being assaulted. Also how you said that there were more police at the protest for justice but at the raid of the capital there was little to no police during that situation.

One sentence that stood out to me was, “I think that the police are aggressors on the right but the trump supporters are the aggressors on the left.” I think this is interesting because the police have been known for being a white supremacists justice system. There are always race motives in the system of justice, especially for people of color.

Thanks for writing this article. I look forward to seeing what you write next because I also have similar ideologies about how everything in the police force is racially motivated. You can even see it through social media today and current events.

Dear Leo:
I am moved by your article, “BLM vs Trump Supporters” because seeing the movie trailer caught my attention. I wanted to know what you had to say about the film and like that you connected related issues to the film.
One sentence you wrote that stands out for me is: “The protesters are just standing there and the rioters are rushing the police.” I think this is somewhat true, because there was at least one incident where a fellow police officer was letting protestors IN. This definitely confused me to see this and your comment made me think about this weird action.

Another sentence that I noticed was: “I think that the police are there to protect people for the most part but the system they are in has systemic racism which causes bad things to happen to minorities. .” This stood out for me because I do see this occurring based on events reported on, involving more minority incidents.

I thought you might be interested in this because of the ratio being presented with the connections between minorities and the police.

Thanks for your writing. I look forward to seeing what you write next because you have chosen a topic that is very explosive, and yet, discussion needs to happen without anger. In this process, both groups you mention willing to discuss and talk without emotions carrying the day, I feel real change is possible.