BLM and the Representation of Kneeling During the National Anthem

Home BLM and the Representation of Kneeling During the National Anthem 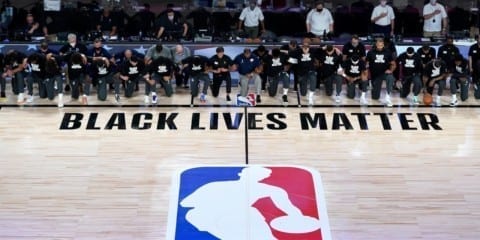 The action of kneeling during the national anthem began back in 2016 when Colin Kaepernick refused to stand during the star spangled banner in order to protest racial injustice and police brutality. “I am not looking for approval. I have to stand up for people that are oppressed.” He was later fired because of choosing to exercise his rights. Following this on October 2nd, 2016 the NFL decided to impose fines on players who kneeled. This put the issue of racial injustice behind closed doors and silenced the players more from expressing their rights. It led to only a few players kneeling during the national anthem but the coverage of racial injustice had finally been put out there more.

The commotion of the cause died down, and got silenced more as time went on and was pushed into the background. However, on the 25th of May in 2020 an African American man by the name of George Floyd was murdered by a police officer who had knelt on his neck for 8 minutes and 46 seconds. The policemen had come to arrest George Floyd for allegedly using a counterfeit bill and it ended with him dead on the street. After this, protests arose for Black Lives Matter and seeking justice for George Floyd and all those who had been killed by police brutality. In a way, it seemed as if the country had finally realized how big of a problem racism still is. Protests arose within 24 hours of the murder all around America, and the globe. People from every single state protested in the United States, along with places in Europe, Canada, Australia and even some in South America, Africa, the Middle East and Asia.

I really liked this article! As someone who was on a team who decided to kneel for the national anthem, this was a very interesting article to read. It is important that we don’t forget why we are kneeling in the first place so we can educate people who do not know.

Dear Liliana,
I appreciate the factual evidence you use to support your claim of America being a country of racial injustice. I like that you mentioned that people are protesting in so many ways to make a change. Like how athletes are refusing to stand for the national anthems before their games. This shows America that change needs to be made. I look forward to your next post because I enjoy reading your passion through the words you write. Thank you.
Kayla Castillo

Dear Liliana,
I appreciate your coverage of the history of the reason people kneel during the National Anthem. I wonder what you are thinking now with all the political unrest here in the United States at the capital this last week? It seems strange that as a country we threw a fit about kneeling, and we had over 1000 people storm the capital this past week. I wonder if people will look to kneeling differently now?
I would love to hear your thoughts!
Sincerely,
Dr. Ilko

Dear Liliana
I like this topic a lot and how you explained things were great. Yes this BLM movement was here back in 2016 and shut down not until 2020 with Gorge Floyd. In this situation, with Gorge Floyd, I liked about because you said that he was killed on the street by police and that’s when America opened their eyes and started to spread awareness around the whole world. I also like how you mention that sports were in this movement such as the NBA. The NBA started by kneeling before a game to show that this is very important and also by putting words love, equality, etc on the back of their jerseys. I like how you mentioned that this was a global thing not just America like Europe was also participating in the BLM movement. I really enjoyed reading this topic great job.

Dear Liliana :
I am proud of your post, “BLM and the Representation of Kneeling During the National Anthem,” because it shows unity to stop all the racial injustice in America. Now athletes and other big names are helping with the cause and showing that enough is enough.
One sentence you wrote that stands out for me is: “<2016 when Colin Kaepernick refused to stand during the star-spangled banner in order to protest racial injustice and police brutality. “I am not looking for approval. I have to stand up for people that are oppressed.” I think this is amazing because he's sacrificing his job to stand up for the oppressed people of America.
Another sentence that I felt strongly about was: “He was later fired because of choosing to exercise his rights. Following this on October 2nd, 2016 the NFL decided to impose fines on players who kneeled. This put the issue of racial injustice behind closed doors and silenced the players more from expressing their rights.” This stood out for me because they are silencing athletes just because they're pointing out the wrongs in America.
Have you seen this book? The Hate U Give - Goodreadswww.goodreads.com › show › 32075671-the-hate-u-give
I thought you might be interested in this because of this post. It's about standing up for racial injustice.
Thanks for your post. I look forward to seeing what you write next because this spreads the importance of BLM. This shows how strong we people of color are.