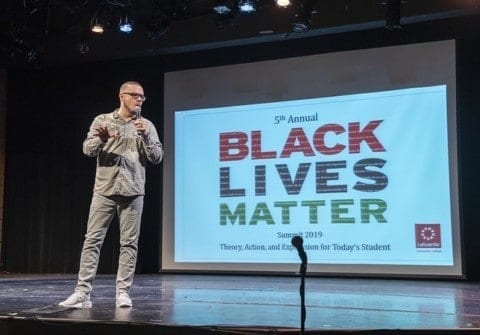 On April 18, 2019, my peers and I from the Nelson Mandela School for Social Justice attended the 5th annual Black Lives Matter Summit held at Laguardia Community College. The keynote speakers were activist Shaun King CEO of The North Star, Co-Founder of the Real Justice PAC, a columnist for The Intercept, and the voice of social justice on the legendary Tom Joyner Morning Show. Alongside activists and MC Talib Kweli, who is one of the most lyrically gifted, socially aware and politically insightful rappers to emerge in the last 20 years. Shaun King talked about injustice in our society, and that we ask for change but never do anything to assist in this change. Talib Kweli taught us about people who claim they are advocating for other black people but are still against each other. Another speaker at the summit was my Principal, Tabari Bomani, who spoke about the injustice in the school system.

In the Black Lives Matter Summit, I learned that Black people thought that things would change throughout time, but we still have to deal with issues that our ancestors had to deal with, for example, segregated schools, Police brutality and more. I learned that in order for us to get the actual change we need to work together as a person and stop separating because divide and conquer is the way they have gotten us to do whatever the oppressors wanted to do to us.