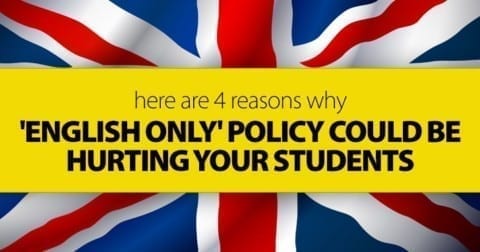 Last month in New Jersey a student was speaking Spanish and told by a teacher, “Speak American.”   Maybe the teacher made a bad choice of words out of frustration, or maybe sheś just racist.  The way I see it, we are in a free country. There is no official language and we can speak whatever language we want.

I have experience with this as a  bilingual teenager.  One day I went to a summer class and I was talking to some friends during the class.  They knew how to speak Spanish, so we spoke that way.  The teacher actually said something similar to this other teacher: ¨This is America.  Speak English.” Imagine being a bilingual person and someone telling you can only speak one of those languages.  It would make you feel uncomfortable speaking your mother tongue.  The message is that Spanish is not as good.

Well that’s what they think, but they’re wrong.  Spanish is one of the best languages that could ever exist. All languages are unique, but there are so many Spanish dialects to enjoy, and they just roll off your tongue.  Also, it is the official language in 20 countries, so thats why Spanish is one of the most important languages in the world.  I would like to tell those people that judge my language, that is really hard to speak two completely different languages and have to go to school in the new one.  When you tell us not to use our language, you are telling us to forget about our home language.