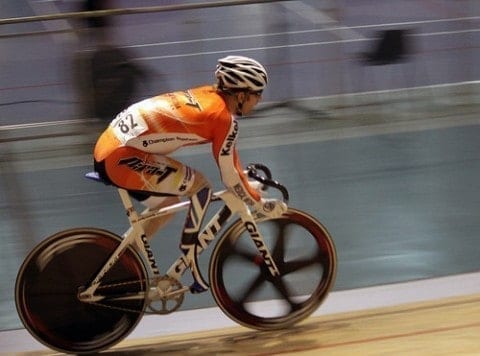 In my research, I tried to learn a little more about the materials used in bike construction and how they affect performance. According to USA Today, road bikes are typically the lightest bikes in the Olympic Games, weighing between 16 to 18 pounds. Their frames are usually made of titanium, carbon, aluminum, or a titanium-aluminum blend. Cross country mountain bikes weigh about 22 pounds, and their frames are either titanium or aluminum. Track (velodrome) bikes are the heaviest, their frames weighing around 25 pounds. They are made of carbon with a little bit of aluminum.

The article in USA Today was informative, but it was published over a decade ago in 2004. According to the New York Times (2014), most bikes used in the Tour de France have carbon frames, with aluminum alloys less common, and titanium frames rarely seen. Carbon frames are mainly used in road racing because they’re super lightweight, but they have a dangerous history of shattering without warning. Inconsistencies in carbon fiber sheets are difficult to detect compared to the obvious warning signs of bending and cracking in aluminum alloys. The carbon frames that have a high confidence of not breaking are currently very expensive compared to equally safe aluminum frames.