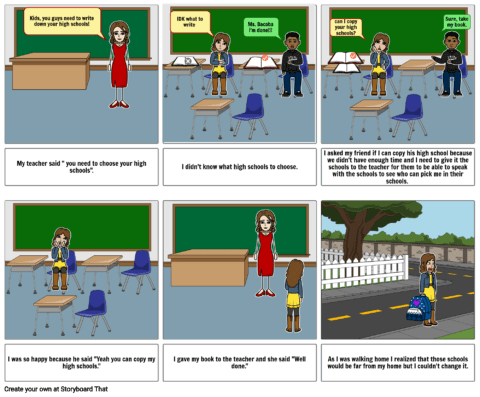 The classroom was quiet and the other students sat at their desks getting ready to choose their schools. My best friends were next to me as always. Fifteen minutes later, people were screaming and running inside the classroom,  papers everywhere. I was very frustrated and I couldn’t really concentrate on choosing schools, so I asked my best friend Anthony. Anthony is Dominican and I met him when I started 6 grades in middle school. He’s taller than me and his hair is really short and curly. I always was talking with him and we walked to our classes together with my other friends who were also Dominican they were my best friends because they spoke Spanish and by that time I always spoke to them in Spanish and sometimes in English in order to practice English. We also had two friends who spoke Arabic so we always talked to them in English.

I asked my friend who was sitting next to me, “Can I copy your high schools?”

“Yes, you can copy my schools!” he said.

I was so content when he told me that, so I started to write down a list in my notebook.

The last period of the day ended and I was walking home as usual with my friends.  Some of them said, “I want to be in the same high school you’re gonna be.”

“I also want to be with you in the same school but I don’t think that we can decide that,” I said.

As we were walking down the street with more people around I realized, “What about if those schools are very far from my home?”

“If that happens you cannot change your schools because Ms. Bacoba said that” one of my friends replied to me.

I felt sad when she told me that. I arrived home, I sat on the couch and I opened google and started to look for schools on my computer. I looked that those all schools were far from my home. Schools in Brooklyn are big and they are a lot of schools in school in order for some of those schools were close to students houses. I saw that one school was really near my home but it had a bad reputation and people don’t really graduate from that school so I was happy that, that school didn’t choose me.

I fall in anxiety because I realized that I would wake more early in order to go to school.

“Don’t worry,” my momma said trying to calm me.

I gave the list to my sister and she checked it.  She said, “One of these schools is very good.”

My uncle from Washington was in our home and he said, “I went to one of these schools and what your sister is saying is really true. So you’re gonna be okay in your new school.”

I was so disappointed and I sat on the couch thinking about the schools I chose and what my momma, sister, and uncle had told me.

The next day I went to school.  I talked with my friends when we were outside and we discuss the schools. We entered the building, and the principal of the school was outside. We went upstairs and I sat in the cold chair waiting for the response of the schools and Ms. Bacouba gave me the response and I read it, very scared. I read that was Park Slope Collegiate I felt that satisfaction because that was the school that my sister had told me was very good and the school my uncle attended in the past.

“What high school do you have?” my best friend asked.

I called my momma at that moment and my uncle was with her.  He said “that school is very good and you’re gonna be fine because I studied at PSC high school when I came to New York,” he said with a smile on his face.

I was very happy in the warm classroom with my friends around me the teacher looked at us while me and my friends were talking about the schools and sitting down in chairs.

When I think back on that moment, it reminds me to not judge something before knowing the meaning of it or its origin. This experience taught me that it isn’t good to copy something from your partner because you have to do it on your own;  however, this time it worked out because I didn’t know anything about schools on my own, but in general its better to ask for help or try to do things by your own.

Dear Heymi
I am pleased with your essay, “Big Decision,” because when I was in middle school I had to choose a high school too and I was scared that I was not going to get into a good high school. but park slope chose me and I felt relief
One sentence you wrote that stands out for me is: “I saw that one school was really near my home but it had a bad reputation and people don’t really graduate from that school so I was happy that, that school didn’t choose me.”
I think this is because you don’t want to go to a bad school that is going to cause you problems and I agree.