Bicycling in the East Bay Can Be Unsafe

Home Bicycling in the East Bay Can Be Unsafe 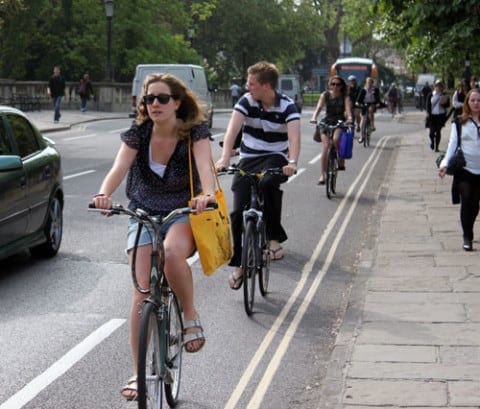 With rising populations in the East Bay riding a bike these days is much more dangerous than it was 100 years ago but some say it’s safer than ever to safely commute around town. Commuting to work in the East Bay has really become popular with more bikeways being built, bike parking facilities constructed to meet the demands of bicycling. This is important to me because we can’t just have people get away with traffic violations. This issue impacts people of all ages elderly to toddlers who ride on the sidewalk with their parents. People find themselves in collisions due to negligence. In some cases people die. “Berkeley police handled at least 17 crashes in April 2019  that resulted in injuries to pedestrians or cyclists, according to preliminary data obtained by Berkeleyside.”

“On my way to KQED the other day, I pulled up next to a fellow bicyclist who shot me a quizzical glance.

“Do you know whether we have to follow traffic regulations?” she asked

In the past years East Bay cities have definitely taken Pedestrian and cyclists in consideration. For example the Berkeley East Shore Pedestrian Bridge built in 2002 aimed to get people out on their feet  instead of driving a car. I can say it’s been a great to have that bridge I’ve seen tons of people ride and walk over the bridge everyday. Ohlone greenway trail a 10 miles long pedestrian and bike path in El Cerrito and Berkeley. Well marked bike lanes added to streets in recent years is also another existing solution. Just last year on Nov 16 the Richmond-San Rafael Bridge Bike / Pedestrian Path opened. Another solution that’s been implemented is an increase of citations given  to cyclists,pedestrians and motorists for simple traffic violations like jay walking and running a stop sign.

Solutions of my own

A solution of my own. Construct more pathways designed for bikes only because walking speed is not the same as biking speed. There’s a lot of ignorant people out there so basic traffic law awareness should be spread out through town. The California roll/stop for bikes has been considered but was never passed. Coming to a complete at a stop sign in my point of view slows things down at stop sign intersections, I see why it wasn’t passed because people could just take advantage of it. My artifact will open up discussions of bicycle safety and bring up questions like is the city I live in making it safe to ride a bike, drive a car and even walk around town? My solution aren’t so different from existing ones but with the right execution, increase of  awareness, understanding and funding to this cause and maybe one day fear is the last thing you would have.

In order to convince  people to go along with these solutions I’m suggesting, I can use pathos logos ethos to raised funds received grants to build bike paths. I got hit by a car so give me money so I don’t die. Something like that.

I looked into population growth in the bay area and The population of the nine-county region grew by over 600,000 people since 2010. I also read about a rise in commuting by bike, parking facilities and bicycle paths are needed in order to keep up with demand. I also read Articles on tragic deaths of cyclists on the very roads I bike everyday. I’m always thankful to able to come home safely because it can be dangerous out there. Especially at rush hour time in the bay area because the only thing on people’s mind is what’s going on in their life and getting home as fast as possible.

Hi Victor,
I think your solutions to fixing these problems are quite unique. A lot of people are unaware of traffic laws as you said and this can make problems more dangerous for bike drivers, pedestrians, and drivers in cars who must share the roads with these people. I definitely think we should widen the road so that there is a bike lane on the majority of roads, possibly separated by rails to stop cars from hitting cyclists.

This is such an interesting topic. I absolutely think that cities should be more involved in getting people to be more active in their everyday lives. As you mentioned many challenges arrive when you think about public safely. Cities should be aware of these risks and work to find solutions that benefit everybody. Your solution of building more biking pathways to increase safety, is a very good idea.

I agree with lior, and I’ve found when driving on larger streets drivers are rude or just completely ignore the bike lane so I end up riding on the sidewalk.

I think this is a great solution, as a biker the bike paths and bicycle friendly streets are very helpful!