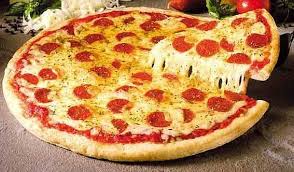 While discussing with my 4th hour Expository class, I learned that one of the favorite pizza places of the local area was one I had never heard of: Georgio’s Pizza. Since there was so much hype about it, I went to go check it out for myself. Yet after trying out their pizza, I felt that it was pretty much the same as any of the other regular pizza places and that my own favorite, Cugino’s Italian Restaurant, is a much better choice on many levels – some of them including the pizza bread, the toppings, and the price of the pizzas. If you look at Georgio’s pizza, the bread is thin and has a pleasant crispness to it. But after getting through the pizza, it starts to hit you that the bread is getting very hard to eat. The crust is very dry and hard and it doesn’t have very much taste to it either. The amount toppings on the pizza were pretty average too. Even though the vegetables were well cooked, there weren’t a lot of them on the slices, and there was not a lot of cheese on the already thin pizza. It also had a thin film of grease over it, enough for my sister to be able to dab it off on a napkin. It was like any other pizza, nothing very impressive about it, even though they had some interesting topping choices. The pricing was also a little on the expensive side, but I guess that is due to the fact that they have an interesting thing where they sell pizza by the slice as well as whole pizzas to college students, so they would have to make some sort of revenue if they were to only buy a couple of slices at a time. Cugino’s, on the other hand, was a whole other experience. Their pizza bread was more flavorful and wasn’t as dry or hard. It was very soft and you could bite into it easily. Even though there was a lot more bread in the pizzas at Cugino’s, it didn’t take away from the rest of the pizza at all. It doesn’t overwhelm your mouth with excessive amounts of bread without the toppings. To go on with the toppings, one thing is for sure – Cugino’s doesn’t hold back. They have plenty of vegetables as well as cheese on their pizza, so you get the full experience of a veggie pizza without being disappointed that it was all veggie or no veggie at all. And the cheese was the best part of the pizza. The rich taste of it was amazing, and there was no grease on it at all. It stretched into thick strings as you ate it and was very filling. Prices at Cugino’s were also a bit on the higher end, but I guess that would have to be the case if they are going to use higher quality ingredients. This would also explain why and their ratings on FourSquare is 8.7 to Georgio’s 7.8. My dad has frequently reported back to me that the waiting lines for Cugino’s stretches out of their doors every time they go to the place to eat. Even if the place is farther away than Georgio’s the quality of the pizza is obviously worth the travel for a lot of people.

How else would you guys deem a pizza to be the best in the area? Are these the only criteria to go by?