Being Threatened By North Korea

Home Being Threatened By North Korea 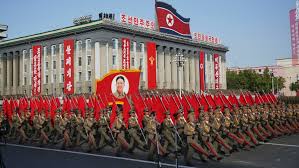 An Issue that I care most about is the North Korea. Recently, North Korea have been threatening other countries with dangerous nuclear weapon, ICBM, which can possibly go across a continent. I strongly believe that this issue could lead to another World War that nobody wants to have. It is also very important issue to me, because if North Korea fires missile to other countries such as Japan, South Korea, United States, then my family, relative, and friends will be in danger.

There are many cons and pros of heading into a war. One of the cons will be setting free of all North Koreans who were physically and mentally abused by their leader, Kim Jong Un. One of the pros is that it will cost thousands of human lives. Some people might believe that it will never happen in the future, but according to the news article. North Korea have succeed with their nuclear missile which can potentially reach Guam where U.S. military base is located.

I hope to see that we can find a better way to deal with North Korea other than a War.