Behind the Scenes of the Electric Chair

Home Behind the Scenes of the Electric Chair 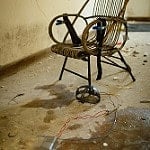 I was inspired by the book, Dead Man Walking by Sister Helen Prejean to gather information about the death penalty, and more specifically the electric chair method. The main character in the book, Patrick Sonnier goes through an arduous trial regarding the assault and murder of two adolescents, and as the book moves along Patrick is accused of playing an active role in the murder alongside his brother, Eddie. To Sister Prejean’s dismay, Patrick is given a date for his execution by electric chair. In this book, we are given a few facts on what happens to a person that goes through this process.

It has been previously said that death by electrocution is one of the more “humane” methods of execution, although lethal injection is currently a more preferred way of execution. In my opinion, and some opinions of others conclude that there really is no humane way of execution.

The process of electrocution is as follows: the patient’s chest, groin, and limbs are strapped to the chair and his or her body is typically shaved to reduce the resistance of the electricity, an electrode in the form of a metal skull cap is placed on his or her scalp, and the forehead is moistened with a saline solution. The patient is covered and the execution team leaves the room, a jolt ranging from 500 to 2,000 volts is then surged through the body, taking about thirty-second to reach the voltage. After that, if the patient’s heart is still beating, an additional jolt is sent through the body.

The process is continued until the patient is dead. Common sites during the shock include: clenching of the hands and violent thrashes of his or her limbs. The aftermath of electrocution includes: steaming and/or swelling of the body. Witnesses of electrocution claimed to have seen the eyes popping out and heard a “frying” sound.

Some may or may not support this form of execution. Electrocution is typically used when access to lethal injection is limited according to the Tennessee legislature in 2014. To my surprise, the number of executions done by electrocution since 1976 is currently 158 people. States including Alabama, Arkansas, Florida, Kentucky, [Oklahoma], South Carolina, Tennessee, Virginia allow the use of electrocution as a form of execution under certain circumstances. I hope that as years go on, this method will become completely illegal in all fifty states.

This is a really great essay! I agree that there is not really a humane form of capital punishment, and I also believe that it should not be happening in the United States of America. I really liked your descriptions about the way electrocution works–it is truly horrible that something like that can happen to a human being by the state that is there to supposedly protect them. I think that one of the biggest issues we have in America right now is our lack of mental healthcare. Many people suffer from mental disorders such as depression, schizophrenia, and bipolar disorder and we don’t really have the right means of help to get people what they need. Instead of murdering convicts (especially with the issue of bias in our court system), we should be spending money in providing therapy to potentially make our citizens more stable.

Wow what a great essay, I have learned so much thank you!