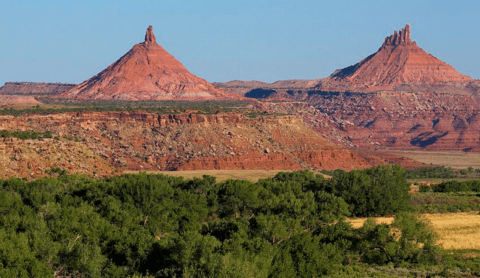 This week, after reading over this New York Times article, I learned more about how the motion to reduce Bears Ears National Monument, among other protected lands, first began. Back in mid-2017, former Interior Secretary Ryan Zinke proposed such legislation to former President Donald Trump. Zinke has stated how the monument was “not the best use of the land,” He as also recommended Trump to not only reduce the land, but turn some of the land within it to be made into national recreation areas or conservation areas, which have lower levels of federal protection.

From this move by Zinke, there was also questioning of the legality of a President reducing previously protected land. By the 1906 Antiquities Act, signed into being by President Theodore Roosevelt, presidents have the power to designate land to be federally protected. Since then, presidents have certainly altered or changed around the borders of existing parks, monuments and areas, but have never reduced it, and certainly not to the extent Trump did. Because of this, many have sued the government over this move, stating that it goes against the Antiquities Act and the separation of powers.

Hey Milo!
As a Utahn and as someone interested in conservation, I find the debate around Bears Ears to be fascinating. I’d be curious to learn more about the impact of the changes in land designation to national recreation areas or other designations because the more I look into the issue the more complex the designations are. For example, why are some lands National Historic Sites and others are National Historic Parks? The debate upon Bears Ears seems to touch on this issue.
I know some folks believe that the Antiquities Act itself is a violation of separation of powers, so I would like to read the legal arguments around it.
Overall, this is a fascinating and diverse issue! Thanks for writing!