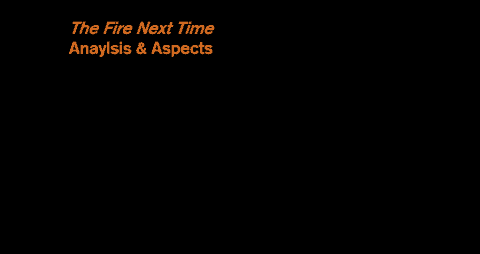 Analysis of Aspects of The Fire Next Time

In James Baldwin’s The Fire Next Time, we can see the author using connotation to describe lyrics he heard in his years as a teen. “Only people who have been “down the line” as the song puts it, know what this music is about.” (42) This is The word “down” could talk about the people who have little to no money or living through a life of hardship, highlighting the poor conditions of black neighborhoods in the inner city. ‘Down the line’ could also mean the connotation of knowing that a bad thing has happened to people before.

“The way most white Americans sing them-sounding.” (42) There is cultural hegemony in the belief that whites sing better than blacks. This is also a look of black & white songs, noticing how they listen to such music very closely. It’s the connotation of making it seem like whites are better blacks in almost everything. It connotes that music was sung differently back then when it was dominated by whites unlike today where it is dominated by people of all color, from blacks and latin americans to K-pop.

“Tonight or tomorrow, or within the next five minutes, he may well be singing “Lonesome in My Bedroom” (42) Predicting where he is in a random word of thought. There is juxtaposition here due to the mentioning of the thought of that singer being anywhere. This can relate to the Black Arts Movement since it notes out a black song. It’s the connotation of  Baldwin talking about how the song influence was growing because of it’s the song’s lyrics and the way it was sung. It was pretty popular back then compared to the songs of now.