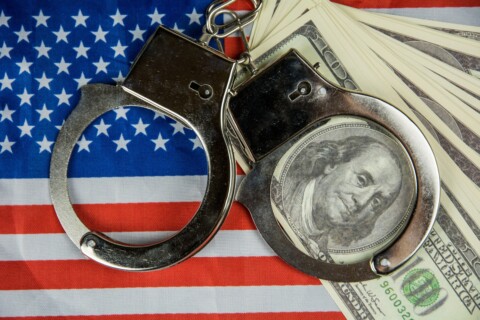 Humankind is inherently corrupt as one can interpret as a witness of this world’s wicked society containing people that choose to benefit themselves instead of the common good. Even in Catholicism, Adam and Eve, the first two humans, partook in a scandal with the devil that they believed would benefit them rather than having perfect communion with God. The Fall archetype was then born highlighting humankind’s common desire for personal gain through disruption of the common good. Nowadays the world runs on money, consequently, humans are so easily swayed by its presence. Corruption is inevitable when it comes into play because money always makes a financially-positive effect in one’s life.

With that in mind, the common swindling and money-grabbing within politics is a perfect example of people doing anything for money, even though they already have much more than the average individual. President Ulysses S. Grant is part of this continuous performance of manipulation. He already had money and power as the President of the United States of America, however this power opened up more criminal opportunities that Grant was able to benefit financially from. He did not participate in only one disgraceful event but a multitude. Consequently, his presidential term came to be known as “Grantism” (Cohn 18). President Grant’s most notorious scandal was the whiskey ring he ran from 1871 to 1875. He profited approximately $3 million, which is worth $63.7 million today (Cohn 17).

Not long ago, “Oscar Wilde once said: ‘Nowadays people know the price of everything and the value of nothing’” (Jeffries 12). Corruption has always and will always be present in the world. Society right now values money more than anything. It is sad that one cannot make it big without money. Stuart Jeffries commented on money’s effect on corruption stating, “Money has become for us what beer was for Homer Simpson – the cause of and solution to all of our problems. Can we make it just the solution? It seems unlikely,” emphasizing the control and total influence money has over all of society (Jeffries). In addition, once one makes it big they gradually become greedier and further tempted by all the opportunities to make more money whether or not it is legal. Money means power and power means more money which creates a never ending staircase of corruption that requires sacrifice of one’s morals and dignity just to go up one more step.

Jeffries, Stuart. “Money Has Corrupted Us. We No Longer Understand What It’s Worth.” The
Guardian, Guardian News and Media, 1 Jan. 2014, www.theguardian.com/money
/2014/jan/01/money-corrupted-us-understand-worth.

Eliana, I really enjoyed your blog post and your analysis. Your historical examples were very informative and interesting as some of us probably did not know facts like that. Your examples like Homer Simpson also added another level of understanding as for most of us, we know who that is. In your first sentence you mentioned how instead of using money to benefitting the common good, people use money in selfish ways and for their own satisfaction. I think you could add some information or examples on how people could use their money for the common good to benefit society. In total, your blog was very well written and you did a really good job of summing up your main points that you wanted to get across to the reader at the end of your blog.

This article is refreshingly well written; however, I believe this problem lies very specifically to an extent within the United States. Nations crossed the world of course have problems with greed and corruption but your example lie specifically in the United States. But what is government itself, but the greatest of all reflections on human nature? One of our founding fathers stated the following about our government, “If men were angels, no government would be necessary. If angels were to govern men, neither external nor internal controls on government would be necessary. In framing a government which is to be administered by men over men, the great difficulty lies in this: you must first enable the government to control the governed; and in the next place oblige it to control itself.” Other governments have taken different approaches at stifling greed and corruption. Examples of this occur within almost all communist revolultions at their beginings with the purging of corrupt elites and the rich. This of course deteriorates over time. Countries like Germany, France, and the UK are taking much different approaches to handling problems like this than the United States has.

“Corruption is inevitable when it comes into play because money always makes a financially-positive effect in one’s life.” I agree with your statement completely. I really like how you explain the chain effect of the money and power one gets, the more greedy one becomes. It just turns into bad circulation. Your example of President Ulysses S. Grant makes your statement even more compelling. https://www.ifac.org/knowledge-gateway/building-trust-ethics/discussion/when-corruption-becomes-way-life-and-what-do-about-it, an article relates to your topic with some extended context that might be helpful.

This post portrays the exact problem with greed in the world today. “Money means power and power means more money which creates a never ending staircase of corruption…” This quote describes the exact reason why money is such an issue that can never go away. Everyone needs money in order to survive, but once money becomes the most important objective in your life, you lose sight of your morals and dignity as a human. The link posted below goes into depth of how money can change the way you think. I really enjoyed your thoughts within this post and hope to read more like this.

I think you did a really great job at incorporating a more unknown piece of history in your blood. Most people are not aware of Grant’s corruption, but you exoplanet it very well and used pieces of evidence that further the explanation. I think that since you added a small section about the Bible you could either elaborate on it further or remove it.