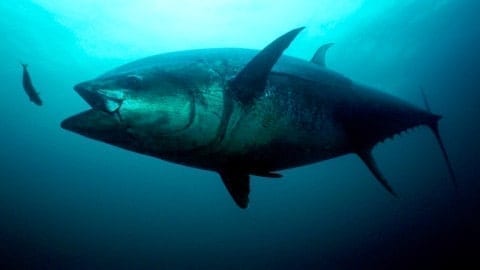 Our air pollution can affect the seafood that we eat. The pollution from coal-powered plants causes poisons like mercury to enter the ocean and then contaminate fish, like tuna. With the decrease of coal-powered plants and the switch to more renewable energy, levels of mercury found in tuna have continued its decline.

Nicholas Fisher tested the levels of methylmercury in 1,300 Western Atlantic bluefin tuna. He found that the levels of methylmercury in tuna were decreasing at a rate of 2 percent a year between 2004 and 2012. He accounts for the decline of mercury in tuna to the decline of mercury emissions from coal-powered plants. Coal power plants began to shut down in 2008 because of the recession and they have not re-opened or have switched to natural gas instead of fossil fuel.

Tuna gets the mercury into their bodies by eating other fish that get the mercury from the water. Fisher says that “fish acquire about 95 percent of mercury from their diet” (Fisher 2016). Mercury poisoning can come from other places like China and still affect tuna in Maine. Smaller fish that live in areas with high pollution can be eaten by fish that do not live there, meaning that stopping pollution locally cannot stop all contamination. Fisher writes in his article that there is no researched that has determined that “mercury levels have dropped [] in the smaller fish on which bluefin prey” (Fisher 2016). Although Fisher could not prove that the fish the tuna ate had reduced mercury found in them, he says that he can “only speculate that that is the case” (Fisher 2016).

In an article published by U.S Energy Information Administration, they wrote that the power plants that are being retired through 2020 are run by coal (Jell 2018). Coal power plants are being shut down because they are either too small to make a real difference or the state requires a renewable source of energy. If a coal plant is too small compared to the big production coal plants, then they will be shut down because it is too costly to maintain. States are requiring more renewable energy to be made so the old and inefficient plants are being shut down. Additionally, switching to natural gasses is cheaper and more efficient than to keep running the fossil fuel plants.