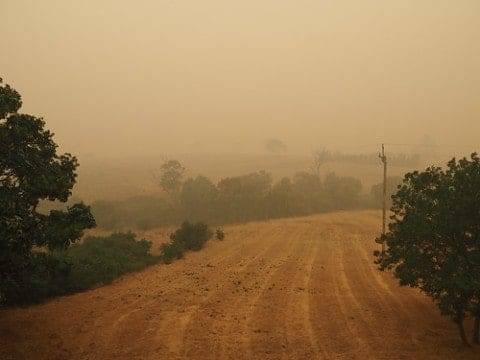 We wanted to write a blog post on the topic of the Australian Bush fires, which were in the news a while ago but are still going on. This topic relates to the California wildfires, which while not on the same scale, affect us living in California. The bush fires have been largely due to uncommonly dry weather in Australia. But isn’t Australia usually dry? Well, the Indian Ocean dipole is a weather pattern where when positive, there’s less rain in Australia and warmer waters near Africa. The dipole has been positive two years in a row, which is really uncommon. This unusual event is connected to climate change. Climate change is a growing problem, and the effects are predicted to hit Australia first because the climate is already so dry. Many people consider this a clear sign that climate change is getting more serious, including ourselves.

Shockingly, over 1 billion animals “may have been affected or killed by the fires sweeping across Australia”. Even if individual animals survive, they won’t live for long because their habitat has been destroyed. It’s necessary to take action on this issue because, in addition to the impacts on human life, there are many species native to Australia that aren’t found elsewhere in the world, many undiscovered, and many of these may have already gone extinct because of the fires. They can’t tell how many animals have died yet because they can’t access many of the burned areas.

One would think that if so many animals have died that the government would be making dramatic efforts to stop and prevent this. Many people were hoping for a change in carbon emissions policy. However, Prime Minister Scott Morrison gave the solution of land clearing, improving emergency fire services, and building more dams to fight the effects of climate change. His reasoning is that coal exports and mining are a large part of the Australian economy, and he doesn’t want to change policies with the risk of people losing jobs and higher taxes. This is an understandable concern, but Morrison has been criticized for going on vacation in Hawaii at the beginning of the month while the fires were getting worse, so we wonder if he’s really been taking the fires seriously in the first place.

To better understand these fires, I think we’re gonna have to wait it out. Because the fires are still burning, we don’t know what the government will really do afterwards, or how the public will react. The sad truth is that after it’s over, the government might not keep their promises of changing anything at all, even if the promises aren’t much. On the other hand, these fires have had a lot of attention in the media, and there is hope that people will take action and be able to help climate change policies shift for the better.

hi Lior, I thought this article was very informative and well thought out. I thought you did a fantastic job of explaining whats going on with only secondhand information.

There is a very troubling problem when it comes to climate change all over the globe. We are seeing wildfires happen every single year around the world whether they are in California or Australia. Some scientists may say it’s too late to reverse these effects, but with better environmental practices we can try to return our climate back to normal. The extreme droughts which have been causing these bush fires are from man-made practices and abuse of every day life (carbon use).

Hi Lior,
This was super interesting article. The notes about the Australian economy being dependent on coal mining as well as sales are really interesting because not many people realize that. I also really enjoyed learning about the Dipole, which I had not previously known much about. I would love to hear more about the economic consequences of these bushfires, as not many people are covering that.

Hey Lior! I thought your article was informative and interesting! I had no idea about the Indian Ocean Dipole and thought you did a great job of explaining it. I like your prescriptive on the idea that we will have to wait until the fires stop to truly understand what to do next. I found an article showing the effects the fires already have on Australia I hope you enjoy it! https://www.bbc.com/news/world-australia-50951043