Asian Killer Hornets in the US?

Home Asian Killer Hornets in the US? 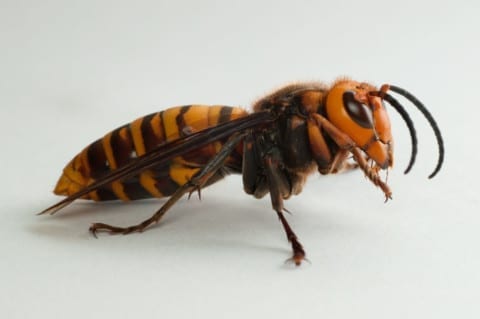 2 days into the new Month of 2020, May, and our luck just gets worse. This month we have a new problem we need to solve. The famous “Giant Asian Hornet” has been spotted in the state of Washington and leaves the residents scared for their well being.

The name “Asian Giant Hornet” sounds scary but what are they exactly? What do they look like? Should I be scared and where did they come from? Let’s look at those questions.

The “Asian Giant Hornet” is called a Giant because it’s wingspan varies from 1.5 inches to 3 inches. The Wasp itself is approximately the size of your thumb and to add that on the stinger a quarter-inch long making the Hornet as a whole the biggest hornet on the face of the earth. So basically they are very big and very scary. Let’s talk about their Venom. When this beast stings you it injects a venom known as mandaratoxin that can in high doses destroy tissue and attack the nervous system of the victim. Even though a single sting is not likely to be deadly, 30-50 people die a year in Japan from taking multiple stings which makes the sting incredibly dangerous.

The Hornet eats Honey bee larvae and one hornet can kill 40 bees in less than a minute by decapitation. They are the biggest killers in the hornet kingdom. The Giant insects use a sent to attract the other hornets in their colony for aid and once they’re in a swarm of about 40 Hornets nothing can stop them from destroying a beehive in about 4 hours. The Japanese bees have a defense against these Hornets. The highest temperature that the hornets can take is 115 Degrees Fahrenheit whereas the Japanese bees can take 117 Degrees. The bees swarm the hornet before the hornet calls for aid and rub against each other to create an area of 116 Degrees around the deadly hornet. The hornet is literally fried to death. This defense is good for the Japanese bees but the American bees don’t have anything to defend themselves.

Not only are the Hornets a concern for the beekeepers but also for humans as well. One of the most gruesome deaths was when a tour guide in Japan was swarmed next to a french couple to help them sightsee. The couple got away but even after the tour guide was stung to death the Hornets continued to sting and feed off the corpse for 4 days. One of the rescuer volunteers involved with retrieving the victim’s body said: “We went into the wood on Monday to help the tour guide, but the mission had to be abandoned after three of our team were stung by the hornets that were swarming around his body. We planned for a safer method – covering our bodies using firefighter suits and went in again today and finally, we were able to carry the body out.”