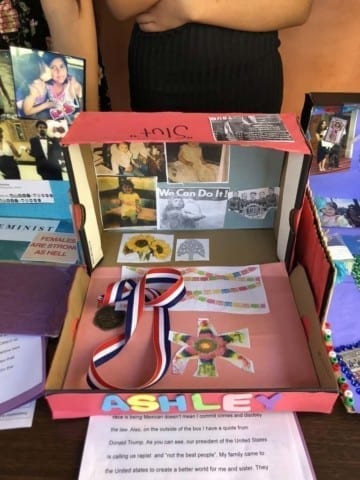 This shadow box represents my counter narrative and the dominant narrative that people think about me. A dominant narrative is what people judge you by or assume what you are. A counter narrative is when you tell your own personal story. The dominant narratives will identify with the pictures outside the box. For example, outside my box there’s popsicle sticks around the box. This identifies the border that Donald Trump is building. On top of the border, there’s a gun meaning that Mexicans are drug dealers and in gangs. Just because my race is being Mexican doesn’t mean I commit crimes and disobey the law. Also, on the outside of the box I have a quote from Donald Trump. As you can see, our president of the United States is calling us rapist  and “not the best people”. My family came to the United states to create a better world for me and sister. They wanted us to have a better education and job. . Starting off, for my counter narrative I have a picture representing my gender identity, gender expression and sex. There’s a picture of Beyonce copying a picture saying, “ We can do this”. This represent that I’m a female and us women have the right to be respected and have power. My second item is a reading medal.This represents that I’m capable of achieving a reading medal when I was in second grade. This encourages me because I prove my oppressors wrong by trying my best and getting a high reading score. My third identity is a picture of my parents representing that my family is important to me. This represents my assigned identity because my family came from Mexico and I identify as a Mexicana. My fourth identity is a oak tree because I was born in Oakland and I’m a Oaklander this represents my assigned identity.

Hey Ashley, I really appreciate all the work you put into your Shadow box. I like how you mentioned expressed yourself about our president and I’m sure many feel the same way. I can relate to you a lot because I as well consider myself Mexican. I was raised in the Bay Area but my parents and all my family is from Mexico but I continue to follow my roots. I also really liked how you put the fence outside your wall. It was one of the objects that caught my attention and is also really powerful.

Hello Ashley, can feel the strong emotions you have about our president actions. I appreciate you addressing the issue and remembering being a women we have as much power as men do!!

Thank you for sharing your work. My name is Jonathan and I am a student at Fremont High School.
Something I liked about your work was how It showed a lot of family on the inside.
Something I have a question about is how you won that medal that is displayed. Please feel free to comment on my work in the future. The address of my student blog is (blank at the moment).
Thank You!

I am proud of your work because it looks like you added in a lot of detail in your box that means alot to you. One sentence you wrote that’s stood out for me is “For example, outside my box there’s popsicle sticks around the box. This identifies the border that Donald Trump is building. On top of the border, there’s a gun meaning that Mexicans are drug dealers and in gangs. Just because my race is being Mexican doesn’t mean I commit crimes and disobey the law” so this stood out to me I can agree with it many people assume people of colors just commit crime and are bad. Also how you said that Trump is keeping us in border and is oppressing us shows internalized oppression or ideological oppression because there oppressing a certain group.