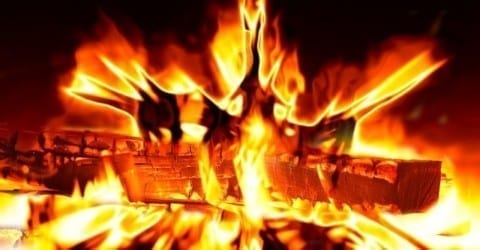 Fwoom! Streaks of oranges, reds and yellows darted around the forest of trees. A small bundle of flames no larger than a rabbit ran around aimlessly. His sparks flickered and grew a bit before going out again when he returned to his rock to sit and recharge his flames. There was never anyone to play with or anything to do. Fire’s body shrank even more as this awful realization awoke, and thoughts began rushing through him. Am I not good enough? Why do all the animals avoid me? Don’t I deserve as much attention as anyone else?

Far away across the sunny clearing he heard the distant cheery songs of birds and the warm laugh of her. As quiet as his feet of uproarious flames could carry him, Fire moved swiftly across the trees. He tried not to stand in one place for too long as to avoid burning the surface. When the melodies became louder and figures began appearing, he watched from a boulder raised above and out of sight. As he peered cautiously, he saw a large, clear pond of sparkling Water. Small sparrows and swallows splashed about and shook their colorful wings as they chirped and tweeted. A deer and her fawn happily lapped at the crisp liquid. An array of rabbits leapt and dashed playfully around the bustling center. And, at the heart of it all, Water was giggling and enjoying every bit of it.

Suddenly, a small spark shook inside of him. What was this feeling? His core felt like it was burning itself yet pumping his tiny figure with dangerously enticing adrenaline. He felt unstoppable. His fiery heart boiled within him and his mind erupted at the sight of this heavenly peace. Why did Water get all the love? Was something wrong with him? Fire reached to a small bird that was resting in its nest for an embrace. His hands of flame crackled and popped as he came closer and closer. At about a twig away, the bird screeched and hurriedly batted its tiny wings away, leaving Fire all alone. He balled his fists and roared in a fury of orange, punching the trees. He was a monster. His eyes sparked with scorching tears and he looked down at the cold shiny surface of the boulder that was now streaked with them.

A distant cry echoed. The leaves shook. The air was thick and dense with tension. All was silent and not a peep was heard. A weary fawn stumbled as she attempted to stand up. Her thin, stick-like legs quivered and her heart raced. “Where is Mother?” her eyes darted from bush to bush and from tree to tree, but her mother was nowhere to be found. She tried to call for her once more, but her voice broke into a raspy tone, as if her throat turned to sandpaper. The fawn finally realized her state and looked to the sky for hope.

Sitting comfortably as a cloud up above and gradually growing larger, Water spotted a fawn hunched over and struggling to lift her head. Water’s heart sank when she saw the desperate creature, and she knew that some hydration would support the poor animal. Gathering all of her might, she released the rainwater that she had been saving for emergencies. The fawn’s eyes lit up and she opened her mouth excitedly to let the moisture replenish her sore throat. With regained energy, she searched for berries that lied along the bushes around her. “With this Water, I might be able to stay alive until mother finds me! Thank you, wherever you are!” she thought to herself, humming as she snapped off a blackberry.

Meanwhile, Fire continued his routine of sitting on his own in deep thought. His flames were contained and barely made any noise, flowing slowly and steadily. Tss! His eyes shot open when his thoughts were abruptly interrupted by one drop of liquid that sent a shock through him. Ouch… One more drop sizzled on his head, then another and another. Soon, Fire was worriedly rushing to a cave. A small brown figure strode brightly in front of his hiding spot. It was peering over to something ahead, and seconds later a larger figure of a darker brown shade ran to it and they embraced. The downpour receded and the sun shone brilliantly, producing a yellow tint that livened up the forest. The two looked up at the sky and there she was, clearer than ever, Water. All of a sudden Fire realized he had seen her everywhere he turned, and once again her laugh vibrated within him. That element, she did this. The deer walked off and kept close together as Water watched them disappear into the thick palace of trees with a tender smile. I’ll show them all what I can do.

A few days later, Fire was squinting and straining to look at the top of an oak tree that towered over him with a monstrous trunk. He had heard a desperate cry that seemed to have blended into the noise of the forest until night fell. Only the crickets now chirped, and the shuffling of leaves and creaking of branches was obvious to Fire. This is my chance! He stood there for several moments and suddenly his head lit up with yellow sparks. Of course! The ball of flame blew and blew until he could create the biggest shot of Fire he was capable of. All at once he set the trunk on Fire, and he watched the flames consume the thick trunk until it produced a large and dense cloud of grey smoke. Perfect! Almost as if on cue, hundreds of forest creatures ran to the burning mass and began running around it, causing a commotion. Fire’s smile quickly faded. They’re not supposed to be doing that! Why are they scared? “I’m glad you’re all here at this hour. Look, you guys, there’s an animal up there. You should help him! I tried to bring attention to the tree and help you but this is a mess,” he pointed to the huddled figure that was now shaking. The animals were darting this way and that, and when he looked down Fire saw the once bright green grass was pitch black and devoured by orange and red. The rate at which it was spreading astonished him, and he quickly became as worried as the tumultuous creatures around him.

Yet, the nerve-wracking night did not last long, for the animals began settling down when they heard a rush of liquid from far away. It roared louder and louder, and as it approached the tree, Fire’s heart sank. His moment was stolen once again. With a blast of pure icy Water, the near-black area dripped and sizzled as the Fire caught on it diminished. The fox that had been stuck in the tree had been rescued by a path of Water and safely returned to the ground. There were cheers of joy. There were jumps and frolics of excitement. Only Fire walked off to his cave with a burning core.

He felt a surge of adrenaline; his small body of flame flickered and roared; he knew he was capable of anything. Fire grew and grew into an enormous mass of bright orange and yellow sparks. Like a hungry lion, he devoured the trees and the grass. He erupted into a fiery fury and consumed everything in his path. Once peacefully sleeping deer and rabbits now weaved worriedly through the maze of blazing leaves and burning wood. But why are they running away? Did I not help these creatures thrive? Water can take many forms, and so can I! “This forest shall learn my worth,” he cried. Now competing with the height of the snowy mountains in the distance, Fire ravaged through, spitting his flames to whimpering creatures. “Take this! It’ll help you, won’t it?” He had transformed into a great raging entity that had only one thing on its mind.

“Why are you doing this?” A cool and stern voice called to him. It was smooth and young yet marinated in experience.

“I’VE BEEN IGNORED AND DEEMED USELESS FOR FAR TOO LONG! I DESERVE THE ATTENTION FOR A CHANGE!” Fire bellowed in his smoky voice that was raspy and broken from the shaking flames around him. “NOW, THERE IS NOTHING YOU CAN DO TO STOP ME FROM GETTING IT!” He roared and puffs of fire left his mouth as he laughed at the fear and shock of the forest below. “FINALLY, YOU HAVE NOTICED MY EXISTENCE!”

“This is no way to handle your troubles, dear Fire.” Water floated beside him as a body of liquid. Fire swung at her with a flaming fist.

“I DO NOT NEED YOUR HELP. I AM DOING JUST FINE, SEE?” Water, taken aback by his violence, tried to cool herself down.

Then, as fluidly as she could, Water gathered the nearby lakes, ponds and seas into one mass. With a swift movement of her hands, the powerful liquid washed over Fire’s enormous body. With many crackles, sizzles and copious amounts of dense smoke, the shower watered him down more and more and he shrank and shrank. The force was so strong that only a small gasp for energy was released from his mouth before Fire was completely obliterated. All that remained of him was in the ashes of the forest he burned.

This was an amazing story, I never would have thought to make a story about the spirits of fire and water. This was a wonderful artistic story.

Thank you so much, that is very motivational to hear!