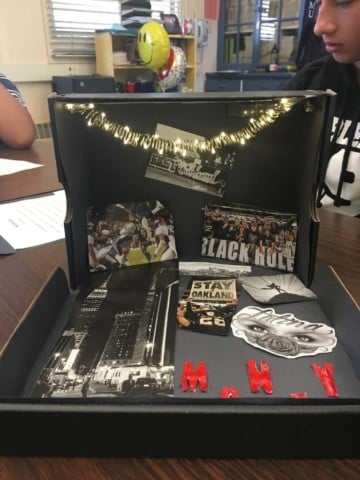 When people see me, they see a female that’s weak and that’s only good for serving men. They see a Mexican who robs and is illegal. When people see me, they see that I’m a gang member because I’m from Oakland. But these are just dominant narratives of my life, you see I’m a female but that doesn’t mean I’m weak. I’m a Latina that’s from Oakland but that doesn’t mean I’m violent or illegal. In my box I put a picture of a woman with a cape that’s standing over a tall mountain because who run the world? Yup girls run the world as Beyonce said. I am a proud female that won’t let anyone tell them what to do or how to do it (unless it’s my madre because she’ll whoop me). I put a picture of a female that has the word Latina over her forehead and a rose over her mouth because as a female, you kind of learn to deal with stereotypes but that rose over her mouth means beauty, independent and fierce. The pictures of Oakland and the Oakland Raiders are a mix of my passion for sports, where I’m from and who I am (a huge Raider fan that’s not ashamed of saying she’s from Oakland). Finally, the white lights hanging above the box bring the theme of black and white together. The lights represent me because I am the light that can brighten your day anytime but I can easily “switch” and be the darkest part of your day.

Dear, Arlette
I love your project even if you don’t have a lot of color on your box because it has the theme of light and darkness. One part of your shadow box that stands out to me is the picture of the latina females eyes because it is beautiful. Another thing that is cool is that you have the city of Oakland and show that its a nice city and isn’t just about crime. You show your culture and where your from so nicely and how you showed the Raiders to represent Oakland and your love of sports. The woman who is a superhero on the hill shows to me how women are strong and can do anything a man can do. Overall your project was very nice and you presented and explained well.

Dear Arlette,
I really like the symbolism you used with the variety of objects. You did a really good job at explaining the picture of the eyes with the rose and the representation of the lights is really cool. One of my favorite things from this post was when you said “you see I’m a female but that doesn’t mean I’m weak” because I am also a latina and I know what it feels like to be portrayed as weak just because of my gender, this is a really cool post and great way to empower you and other girls who have to deal with those stereotypes. To further your thinking I would like to ask some questions, Do you think the dominant culture benefits from stereotyping others? Do you think there are good stereotypes? where do stereotypes come from?