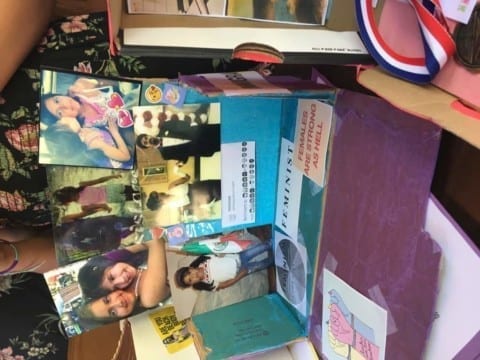 This shadow box represents 3 of my identities which are being a female, being Mexican, and being an older sister. When people look at me, they see a Latina girl who is proud to be who she is but put down by all the hateful slurs told by many racist people about the Latino community. A dominant narrative that many people may assume is that I am undocumented just because I am Latina and my parents are too. Another dominant narrative that people may assume is that I am a threat to society simply because I am a Latina living in Oakland, so they are quick to assume that I’m a bad influence and that I must be in a gang. I see myself as a young independent person who is HONORED to be a Latina feminist in the Oakland community. In my shadow box I show my counter narrative by putting quotes and pictures that are true to me, true to my family, and to my community. On the outside of my shadow box I have chosen to include dominant narratives that people assume about my community and my family because I think that it is important for people to know that those dominant narratives are wrong. Many people may believe that my community is a bad place but that’s because they only hear other people’s stories and choose to believe them. Also, many people might assume the same thing as our current president does about Mexican/Latino people.

Dear Ariana,
Thank you for putting yourself out there and expressing things that are important to you as a Latina Feminist. I really enjoyed looked at and reading about your shadow box because you talked a lot about false narratives that people immediately assume about you due to your ethnicity. I too have received the same treatment, and I can agree that people will always think what they want to. However, I really love that you are sticking true to yourself no matter what others think of you, and recognize how much power and strength you hold in being a Latina feminist in the Oakland community.

Thank you for sharing your work. My name is Isis Smith and I am a student at Fremont High School.
Something I liked about your work was the pictures you put in to describe who you are and what you put inside and how you did it.
Something I have a question about is why did you put those pictures and are they special and important to you. Please feel free to comment on my work in the future. And you can see it because I finished.
Thank You!

Dear Ariana,
One sentence that stood out to me was how you added pictures of your childhood it shows your family. It also shows me how you are showing that your family is important to you.
Another part that I liked was the colors of your box made it so colorful and attracting to look at.
Great work on your artist statement too you rock!
Sincerely, martha

I am happy about how your shadow box turned out. I know you didn’t have a lot of time to work on it, but you still worked hard and made your shadow box looked fantastic. I appreciate the work you put into that. One sentence you wrote that stood out to me is ¨I see myself as a young independent person who is HONORED to be a Latina feminist in the Oakland community¨. I liked that sentence because you are showing how proud you are to be who you are.
Thank you for your writing! I look forward to seeing your fabulous writing in the future because your work are always amazing, like this shadow box post!