Are we abusing animals for our own health

Home Are we abusing animals for our own health 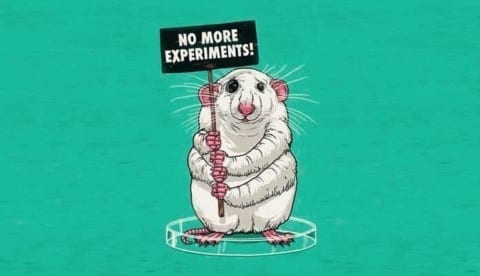 Animal testing is unethical, should be made against the law, and considered animal exploitation.I believe that it should be illegal because the test that scientists use are unpredictable  to the health of the animal. Most methods used by the scientist could be considered animal cruelty. According to an Article on Neavs.org 92%of test done fail and kill the animals.But when the test does work it’s not always reliable because it’s tested on animals , not humans and could make an even bigger problem. According to PETA’s website, 100 million defenseless animals die from tests in the US laboratory’s yearly. The animals are vulnerable  when it comes to testing.Humans don’t have the right to treat animals how they want, just because they can’t talk and defend themselves doesn’t mean the animals should be treated less than humans.Animals have feelings just like humans do.So in conclusion, animal testing is a very controversial topic, but if laws aren’t made to protect animals from animal testing, then it should be made illegal no matter the circumstances.

I believe animal testing should be legal for many reasons. The main one is tests have contributed to discoveries of life-saving cures and treatments for humans. The second reason is animals are the closest living thing to a human being. Which makes them appropriate subject for testing. Also some tests can’t be performed on humans do too toxic substances or genetic manipulation. Animals benefit from testing as well, if tests weren’t performed many would have died if diseases such as rabies, distemper, feline leukemia, infectious hepatitis virus, tetanus, and anthrax. Last but not least, few animals are used for testing, we consume more animals then we research. You have some very valuable points supporting your opinion on how it should be illegal. Thank you for sharing your voice.

Using animals for research has been a topic of controversial for a long time, I would like to say, isn’t killing pigs, cows, chickens, animal cruelty as well? We live in a society that makes it ok because we have killed and eaten them for so long. Also, I’m pretty sure over 50% of all medicine that we have available to us was made with the involvement of animals in one way or another. Are you saying we should stop medication improvement to save some animals? If animals and humans are equal, then why must animals be treated differently than humans. This has been a long topic of conversation and I’m glad to see another person hopping in and asserting their own opinion. Try to think about both sides. Good job on sharing your voice!