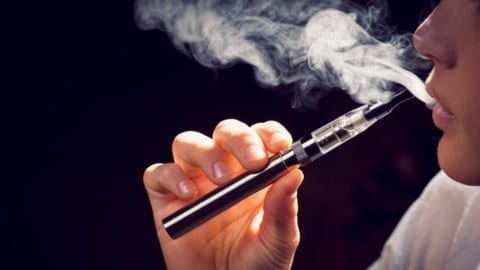 Tobacco use has a long history in the U.S. But by the 1960s doctors and scientists have conclusively established that smoking cigarettes poses serious health risks such as heart disease and cancer. Despite the risks, millions of people in the United States continue to smoke, and more start every year. In 2003 Chinese pharmacist Hon Lik invented the modern electronic cigarette, or “e-cigarette.” E-cigarettes have been touted as a safer alternative to smoking as well as a tool to assist with quitting smoking cigarettes. However, many doctors express concern that e-cigarettes have not yet been proven safe in peer-reviewed research and may pose other, as-yet unknown health effects. Additionally, public health officials have expressed concerns that the fruit- and candy-flavored e-juices often used in e-cigarettes may appeal to adolescents and serve as a gateway to traditional cigarettes and other tobacco products.

Since the introduction of e-cigarettes into the U.S. market in 2009, they have grown exponentially in popularity and sales, to the tune of $1.7 billion. Legions of lifelong users have converted to vaping, trading the tar and carcinogens of cigarettes for the seemingly safer alternative. Electronic cigarettes, or e-cigarettes, are battery-powered devices that provide doses of nicotine and other additives to the user in an aerosol. Depending on the brand, e-cigarette cartridges typically contain nicotine, a component to produce the aerosol, and flavorings (e.g., fruit, mint, or chocolate). Potentially harmful constituents also have been documented in some e-cigarette cartridges, including irritants, genotoxins, and animal carcinogens. Whether e-cigarettes can safely help people quit smoking is also unknown, but with their fruit and candy flavors, they have a clear potential to entice new smokers. Currently, no federal or state law governs the sale of e-cigarettes. A bill in the state Senate would restrict the sale of the devices to people 18 and older. But with such an aforementioned variety of flavors in e-cigarettes, health experts, substance abuse prevention officials and lawmakers are increasingly concerned that e-cigarette manufacturers are targeting teens. “They are adding all these interesting flavors and they are pandering to people who are nonsmokers or more specifically kids,” said Dr. Richard Bell, a Berks County pulmonologist and a member of the Pennsylvania Medical Society. “I’m not sure an adult would be attracted to a bubblegum flavor cigarette.” Bell voices his concerns about e-cigarettes in the public health community by explaining that Big Tobacco is increasingly marketing the electronic devices to minors. They are doing this by using many of the same promotional techniques it used to hook previous generations to cigarettes. Their techniques include using television ads, magazine ads, sports sponsorships, and cartoon characters.

I agree with you. Based on my research on juul, vape Juice contains nicotine, propylene glycol, vegetable glycerin, and flavorings. E- Cigarettes were imported to U.S only in 2006 so no long term effects are known. So just because it’s safer doesn’t mean it’s safe. People with asthma are triggered by e-cigarette more dramatically than smoking. People with lung conditions may be at higher risk of vaping from chronic obstructive pulmonary disease. People say e-cigarettes are better because they don’t contain tobacco, but they release toxic chemicals such as- formaldehyde. One child even died from e-cigarette poisoning in 2014 after swallowing liquid nicotine. From 2013 to 2015, there was 1500 increase in children under 6 poisoned by nicotine in e-cigarettes. Please check our website on juuls for more information. Our goal is to reduce the accessibility in New York. https://wordpress.com/posts/my/freshpod.home.blog

Johan, I mean it when I say that this is an extremely insightful blog post with accurate information ranging from the selling of tobacco in general to the selling of e-cigarettes and electronic devices. I really like how you tied them all together and how you display the facts in an unbiased manner. I also like how you attribute the increasing popularity of these companies to their greed and possible motive for attempting to sell to minors. Very unbiased. Very factual. Amazing.

In the process, my partners and I are also creating a blog regarding the same issue. You can access this blog at: https://wordpress.com/view/boycottnicotine.wordpress.com

I suggest you check it out!

Do exercise or something that keeps your mind active

Johan,
This is a very interesting post. It is somewhat frightening to think that big corporations would be targeting a younger demographic in the sale of potentially harmful e-cigarettes. Do you know if this is factual? I wonder if the multitude of flavors is just another way that these e-cigarette companies help smokers quit by offering a better tasting alternative to cigarettes. Also do you know why the advertisements you mentioned have not be shown in Utah?