Are Shooting Games a Reality?

Home Are Shooting Games a Reality? 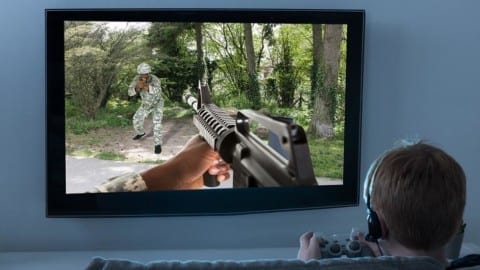 In Afghanistan, a country where war doesn’t stop in any time soon, children and teens find themselves escaping reality for hours at a time. Afghanistan, a country where it has been at war for more than 40 years, leave the thought that Young Afghans have no memory of peace due to all the violence occurring. According to the article, “War Games” , roughly about 150,000 Afghans and more than 40,000 civilians have died since 2001.

This is important to know due to the fact that despite there being war all around children and teens, they love playing violent video games. PUBG is a very popular game for them. Essentially it is a third person shooter game which promotes violence and distracts young people from not only their school work but also reality.

Do you think playing war games can distract you from the war happening around you?

I am intrigued by your post, “Are Shooting Games a Reality?” with a pericellular take on children not recalling what peace truly is like. Even more so with the support of violent video games being behind this take.

One sentence that really stood out to me was, “a country where it has been at war for more than 40 years, leave the thought that Young Afghans have no memory of peace due to all the violence occurring.” As I find this mind-boggling to think about how this country has not known peace for over 40 years. This really is heartbreaking, especially knowing children have not known peace for this long.

Thanks for writing this, I look forward to seeing you in the near future with you’re interesting takes on these discussions and topics. Especially regarding war and peace such as.

I usually like video games, but not particularly war games. I much prefer adventure games or even better online gambling games. If this is also your case, you can opt for betting sites not on gamstop. This kind of site can easily make you enough money, especially when you have a very good game strategy. If you are a newbie in this field, I am willing to share my experience with you to help you better understand how this type of games works.

This will eventually breach state boundaries and result in significant issues. Learn more about one of the top online gambling sites, Yukon Gold Casino. The UK Gambling Commission and the Malta Gaming Authority both grant licenses to the operator. After writing my Yukon Gold review, I am certain that it is a reliable platform. Learn more about Yukon Gold at https://nzcasimile.co.nz/casino/yukon-gold/ You may contact its great customer support through live chat. Yukon Gold also provides players entertaining games and top-notch casino software from Microgaming and other top developers. Yukon Gold will give you 125 free spins when you sign up! Have fun and win big!