Are salaries equal throughout professional sports? 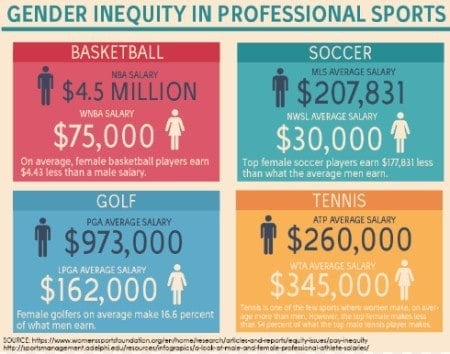 It is no secret that women and men are paid differently even though they are doing the same exact thing. Female doctors, actors, teachers, managers, etc. are paid less than their male coworkers. Women in the Finance and Insurance make $48,800 whereas men in the same industry make $68,800, ultimately $20,000 more than women. Likewise, in Educational Services, women make $44,500 while men make $51,400, a $6,900 gap. Women earn 23.7% less than men, so for every dollar a man makes, a woman makes 76¢. Average salary per gender also depends on what state they live in. Somewhere like Texas is going to be much different than somewhere like Vermont. In Texas, the difference between salary is $16,200 and in Vermont it is $7,400. But how are female athletes paid compared to male athletes for playing the same sport?

In 2014 the PGA tour awarded the winner with $340 million while the LPGA only awarding $61.6 million in 2015, which was a new high for the LPGA. Why is there a $278.4 gap when both athletes are achieving the same goal? Professional basketball is no better. In 2015, WNBA players had a minimum salary of $38,000 while an NBA players salaries was a minimum of $525,093. Now, the NBA does bring in more revenue for ESPN, but the same cannot be said for UFC fighter Ronda Rousey who contributes to television viewers just as much as any male fighter. Chris Weidman, another UFC fighter, had his salary go up $1000,000 each time he won, while Rousey’s salary only went up $10,000. Even more alarming, in US Soccer, “each player on the USWNT earns $99,000 per year provided the team wins 20 “friendlies” (exhibition matches), the minimum number of matches they would play. By contrast, each men’s player would earn $263,320 for the same feat and would still earn $100,000 if the team lost all 20 games. The women receive no extra pay for playing additional matches above 20, while the men earn anywhere between $5,000 and $17,625 for each match beyond 20.” In what sense is that ever fair?

However, “tennis is the most gender equitable sport for women”, along with FIVB Volleyball, World Major Marathons, and the World Surf League. In each of the sports listed above, the pay is still not exactly equal, but the gap is much less and the sports idolize the females just as much as they idolize the men. So how do we fix the issue of the gender pay gap, for a day to day worker to a professional athlete? Raising minimum wage, having women on the board of companies, and openly discussing how much a woman makes compared to a man in the workplace. When men and women can agree on the fact that the pay gap is unacceptable, whether you are a teacher or a professional golfer, we will see change. Counties around the world, like Iceland, have made it illegal to pay differently based on gender and corporations are now required to prove they pay employees the same or face fines. It does not matter what industry you are in, a female MUST make as much money as men for accomplishing the same thing and for being just as qualified.