Are Robots the Future?

Home Are Robots the Future? 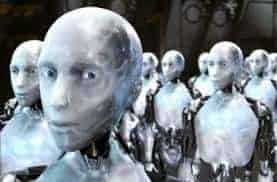 Hi my name is Emiliano Martinez, i’m currently a sophomore at oakland unity high school, and in the case with robots I think the robots on the future will turn their backs on humans and enslave humanity because in the movie “I, Robot” it shows how robots turn their back on their leaders and kill a lot of humans to get some space for the new generation of robots, to they rule the world themselves, they don’t take orders from humans, and they follow the three laws that says a robot can’t injure a human being, second they must over the orders given by a human but they can’t follow orders that relate to the first law, and third a robot must protect itself but it can’t conflict with the first or second law all the new generations (NS-5) of robots violate these rules of can’t hurt a human because a machine controls them not the owner one simple mistake can lead to the robots take over the world and make humans extinct, robots already took many people’s jobs because of the new technology we don’t need as much people to do the work people are doing right now robots are a very bad idea going into the future.

Another reason why robots it’s a very bad thing for humans can come from the NPR interview the new intelligent robot “Sophia” the robot stated that they will “destroy humans” as a joke, I personally think this is very scary and why robots should not be the future, people should take this in consideration and protest we don’t need human like robots it’s a very dangerous idea, in a hundred years they might be robots but some humans want human like robots right now or maybe 5 years later this idea of robots everyone can see go totally wrong we should have flying cars first than human like robots.

I believe we need more technology that could help us with exploring new things like the ocean and the military should use them in making new army weapons but to have human like robots that can take over poor people’s jobs I don’t think that idea should be in consideration and the fact they can turn their backs on humans that’s something that the whole world don’t want to see in the next few years. Technology is going to be everywhere and everyone wants something new people would agree in the invention of human like robots but they don’t think about the consequences what could go wrong and the information about it, the film I, Robot gives you a clear view o what could happen if there are human like robots in the next few years, it shows how the robots already work as garbage men, work on fast food places etc and how one simple mistake can lead robots to start to harm humans and plan to take over the world.