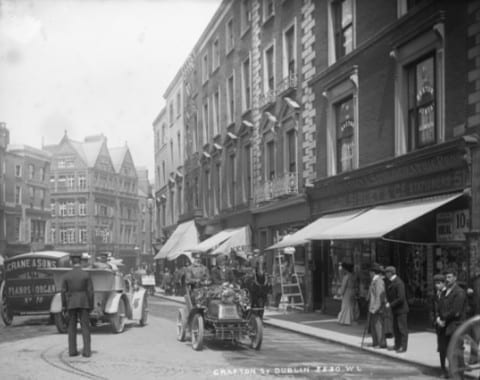 In James Joyce’s short story “Araby,” the narrator’s desire for change through his infatuation with Mangan’s sister demonstrates the story’s message that people wish to find contentment in new experiences. At the beginning of the story, we are introduced to the run-of-the-mill lifestyle of those in Dublin, specifically North Richmond Street, which was “a quiet street except at the hour when the Christian Brothers’ School set the boys free,” explaining that the lives of Dubliners rarely fluctuate as seen through the mundane setting (Joyce 1). The narrator, however, seeks change by pursuing his love for Mangan’s sister, a love so intense that he feels as though his current, humdrum life “stood between me and my desire,” indicating the frustration he feels when change seems unattainable (Joyce 12). Ultimately, the narrator gives up on his endeavor and returns back to his original way of living, referring to himself as a “creature driven and derided by vanity,” exposing his belief that change will never come for him (Joyce 37). All in all, the narrator’s pursuit of a transformation of his life proves that people believe change will bring fulfillment, but they experience frustration when desirable results fail to come into fruition.

The element of James Joyce’s “Araby” that I can emulate in my capstone project is the element of a relatable character. In most literary works, the protagonist has a backstory, goal, or desire that draws readers in through a connection to the experiences of the audience. The narrator of “Araby” longs for change amidst his unchanging life, as many people feel in their own lives. By emulating the relatability of a protagonist in my short story or poem, I can develop a complex character that contributes to the depth of the narrative and the overall message of my writing.