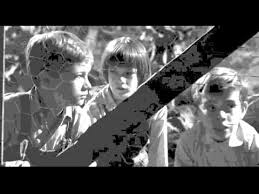 We chose this part of the scene because we were curious on who “Boo Radley” was. In this scene Jem and Scout was explaining to Dill who Boo Radley was. According to the scene page 9 Jem states, “Judging from his tracks, he is about six and a half feet tall, he eats raw squirrels and all the cats he can catch.” “There’s a long jagged scar running all the way across his face”. “His teeth are yellow and rotten,his eyes are popped, and he drools most of the time”. According to Jem, boo Radley sounds very horrifying to the neighborhood.we were very anxious to read this part of the scene because of they way they assumed how boo Radley is. But, is he really creepy?

While acting this scene out we had a very hard time. We had to restart the playing of the scene a couple of times.It was an great experience and fun to act out.

What we learned about this play is that people just assume things about one another, when they don’t really know what the person is going through or how the person feels. Everyone thinks Boo is scary and creepy but what if he’s not?