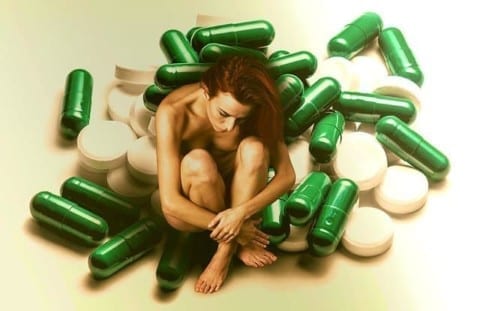 The use of anti-depressants in America has risen over the past few years. About 16 million people take antidepressants according to a survey taken from 2011-2014 and that number is expected to climb.

“Modern populations are increasingly overfed, malnourished, sedentary, sunlight-deficient, sleep-deprived, and socially-isolated,” Brandon H Hidaka states in his paper Depression as a Disease of Modernity: Explanations for Increasing Prevalence. With technologies and stricter work and school schedules, people in modern countries spend more time indoors, don’t eat properly, and fail to get enough sleep every night. He also makes the connection that urban dwellers tend to have more psychiatric disorders then those in rural areas. He takes a stand that more traditional households, such that of the British, since they tend to be church-going, have lower rates of depression. The Amish have even lower, about 1%.

Since I live in Utah, I know of an interesting fact about our state: we take that most antidepressants. In an article, they try to link Mormondom to depression. It’s an argumentative piece and the points from I’m taking from it are very one sided, but I think they raise an interesting point especially in light of the previous paper. Dr. Curtis, in the piece, says, “…I think the cultural issue is very real. There is the expectation that you should be happy, and if you’re not happy, you’re failing.” Helen Wright from Taylorsville says perhaps it’s easier on a marriage. Your partner can just take them and neither of you delve into their problems to find out you’re the reason.

I am no expert on the LDS faith, but it seems to be one built on tradition. I think that both ideas have truth behind them. I think that our new lifestyles of sitting indoors and being constantly stressed and rushed are having an affect, as Hidaka says. I also think that societal pressures let it be religion, getting a job, and getting into college/university also adds onto that. Since this is a global epidemic, I’d like to hear about it from others.

Anna,
Thank you so much for sharing. This is such a crucial subject and issue going on right now. So many teenagers and young kids are on anti-depressants. It is very scary but also very heartbreaking. I believe that this article below will be very interesting to you. Thank you again for sharing!
https://www.statnews.com/2016/06/08/antidepressants-teens-kids/
Does it really work, or is it a placebo?
I’ll be interested to hear what you think!

Anna,
The antidepressant use is unfortunately rising. In this article, https://www.webmd.com/depression/news/20111019/use-of-antidepressants-on-the-rise-in-the-us
it says, “About 11% of Americans aged 12 or older take antidepressants.” That is a staggering high number when you think about it. I like it when you said, “I think that our new lifestyles of sitting indoors and being constantly stressed and rushed are having an affect,” that basically is how society is today. Thank you for sharing and I would love to hear more from you on this issue.

Anna, I really liked this piece! I think that nowadays so many people are taking anti-depressants that we are almost acting like it is okay. We don’t want people to be depressed, but it is kind of turning into a “trend” to be depressed. I do think with all the work from school and social standards, students struggle a lot more than they did during the past, but what can we do to change this? Personally, for me I know so many people on anti-depressants in Utah so that statistic doesn’t surprise me at all. I do think the Mormon culture has a large effect on our city that is rarely positive. Thank you for sharing, I am very interested in your topic!

Hi, Anna! Thank you for sharing; I thought your post was very intriguing to read. I agree that today antidepressant use is rising due to how much stress is put on us from a young age. I found it interesting how those who follow a religion are less susceptible to developing depression than those who don’t- despite Mormons. Diving deeper behind the answer of it’s “the culture”- could you please elaborate on what kind of Mormon cultural influences specifically lead to depression? I thought your article was great. Again, thank you for sharing.