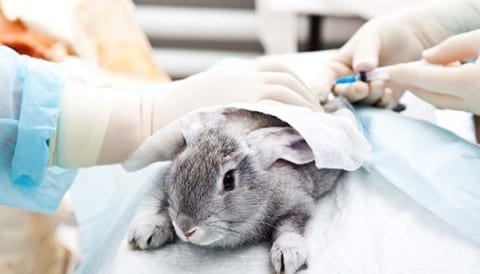 There are many pros that support animal testing. For example, animal testing has contributed to numerous life-saving cures and treatments. The California Biomedical Research Association states that almost every medical breakthrough that has occurred in the past 100 years has been a result of animals. An example of this is experiments where dogs’ pancreases removed led to the discovery of insulin, essential to saving the lives of diabetics. Another pro is the fact that animals are similar to human beings in many ways. Chimpanzees share 99% of their DNA with humans and mice share 98% of theirs. As a result, animals make appropriate research subjects. All mammals, including humans, are descended from common ancestors that have the same set of organs that function the same. A third pro is the fact that sometimes animals benefit from being tested on. Vaccines tested on animals has helped millions of them survive many diseases like rabies, distemper, feline leukemia, infectious hepatitis virus, and tetanus.

Some of the arguments against animal testing include the fact that animal testing is cruel and inhumane. According to the Humane Society International, animals that are used in experiments are often subjected to cruel treatments including, force feeding, forced inhalation, food and water deprivation, and prolonged periods of physical restraint. Another con is that alternative testing methods are available to replace the need for animals. In vitro (in glass) testing, which is studying cell cultures in a petri dish can produce relevant results because actual human cells can be used. A third con is the fact that animals are very different from humans and therefore make poor test subjects. The anatomic, metabolic, and cellular differences between animals and humans make it so that results found from animals testing often cannot be applied to human beings.

After reading your post, my group and I have to say that we agree with your con side on animal testing. You pointed out some great reasons as to why animal testing is not right. Especially when you explained that animals are being hurt when their tested on. “Tiny mice grow tumors as large as their own bodies,kittens are purposely blinded…After enduring these terrifying, painful procedures, animals are then usually dumped back into a cage without any painkillers“ (1.) While this is very important, we wanted to to help express why animal testing is cruel and inhuman. “According to the Humane Society International, Animals that are used in experiments are often subjected to cruel treatments including, force feeding, forced inhalation, food and water deprivation, and prolonged periods of physical resistance”(2.) Animal testing is abusive and hurts animals.The poor animals are suffering when being tested on. This is not right. Animals can feel pain, because animals can’t protect themselves i’m doing it for them. Likely, when researching we found that animals testing is pricey. “ The government spends as much as $14.5 billion per year on animal experimentation” (3.) Each type of testing is expensive. “$9.6 million to inject LSD into the brains of rabbits to determine whether the drug caused an increase in eye blinks and head-bobbing; $7.6 million to investigate whether psychedelic drugs cause the heads of mice to twitch; $1.5 million to determine whether meth is toxic to mice brains; $1.1 million to see if meth-addicted monkeys would choose food over the drug; and a $709,981 study to determine if lonely rats are more likely to become addicted to drugs.”(4.) It is logical to say that there are multiple ways we could put that money into instead of spending so much of it on animal testing. This could be a solution to others problems we have. After All, other testing methods are cheaper, for example vitro testing is cheaper to use than animals. “vitro methods are amenable to “high throughput” automation using robotics—all at a much lower cost than animal tests”(5.)Thus, we can put the money we save from animal testing into the worlds problems. Since there are so many big problems in the world, why not make a problem smaller by putting some of the money we would save into the problem? While we are talking about treatments for those who are sick, why not help pay families medical bills? Not only did we find this but, treatments that work on animals don’t always work on humans. “The Journal of the American Medical Association, researchers found that medical treatments developed in animals rarely translated to humans”(6.) In fact, according to former National Cancer Institute Director Dr. Richard Klausner, they have found the cure to cancer on mice but when they put the treatment on humans it didn’t work (7.) Why would we spend lots of money one something that isn’t going to work? It’s a waste of money, time, and it kills and hurts so many lives. Those in favor of animal testing might say that testing on animals is helping people and is the only way to find out if treatments work or not, but this is can easily be opposed. “ Almost every type of human and animal cell can be grown in the laboratory. Scientists have even managed to coax cells to grow 3D structures, such as miniature human organs”(8.) Seeing that there are nicer ways to test out treatments we should use them, than we won’t be killing so many poor lives. Hence, that claim is weak because there are non aggressive ways to test out treatments. In all, animals suffer from animal testing, its expensive, and it’s not accurate for humans. Thus, it is easy and valid to say that animals should not be tested on.

To begin with, animal testing should go on because animal testing has contributed to numerous life-saving cures and treatments. Without animal testing, major medical treatments may not have been found. In fact, The California Biomedical Research Association claims that, “almost every medical breakthrough that has occured in the past 100 years has been a result of animals” (1). Some of these medical breakthroughs include, “lifesaving leukemia treatments, antibiotics and anesthetics…transplant surgery…transplant surgery” (2). If we don’t want animal testing then why are we always fighting that doctors and researchers don’t do their work with finding a treatment for an illness? The animals are the ones who help find the cure for illnesses and if people don’t want to use animals for testing it’s going to take a lot of more time to find a cure without animal testing than with.

Furthermore, animals make good test subjects because of their short life cycle. In fact, since animals don’t live as long as a human would, “they can be studied throughout their whole life span or across several generations” (5). In fact, rats are the most used test subjects in labs for research and as a matter of fact “Laboratory mice, for example, live for only two to three years” (6). This meaning that researchers using mice for testing in labs can use the mice for their entire lifespan making them an appropriate test subject since they don’t live as long as humans. Animal testing should be used because if you really think about it what would we use instead of animals? Plants? Rocks? Even worse, humans? Animals are the best fit because they have been used for many research projects already and have cured many illnesses in the past 100 years.

Many may argue, that animals die because of all the chemicals the researches are putting in them. In fact, animal research for animal health has resulted in “many life-saving and life-extending treatments for cats, dogs, farm animals, wildlife and endangered species” (7). So not only does animal testing benefit humans for cures but they also benefit the animals being tested on and other animals that need the cure, without animal research we would have never gotten the treatments for “organ transplants, vaccines for rabies, distemper, parvo virus, infectious hepatitis, anthrax” (8). As you can see, animal research does help cure humans for treatments but the animals also benefit themselves from being tested on because the evidence is stating that animal research has also benefited other animals that needed the cure to live.

In conclusion, animal testing should be used because animal testing has cured many treatments in the last 100 years, because they share a big amount of data, and because of their short life span.