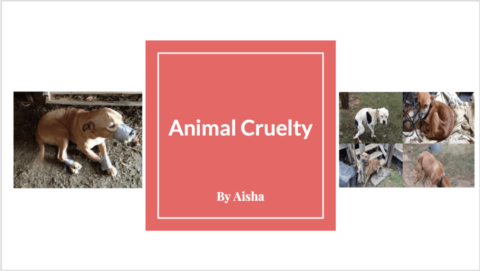 Animal cruelty is intentional acts of violence towards animals which also includes neglecting or failure to provide welfare of an animal under the owner’s control. I am passionate about this topic since animals from all over the world are not treated properly or being taken care of when they should be. I believe that animals should be taken care of and be given attention and affection. This along with other social issues is important as animal lives are important too. Most people don’t view this as serious as a gun shooting but animals are living things as well who are being abused. Animal abuse and human abuse should be viewed equally. Me being an animal lover as well as knowing people who are close to me that own pets add to how I feel about how animals should be treated properly and the importance of animal life.

Before starting this project I knew about the multiples ways on how animals are abused, and that they are abused both physically and psychologically. I also knew that animal cruelty happens all over the world. However after this project and doing research I learned how neglecting was the most common type of animal cruelty, whereas I thought it was physical. In addition, I found out the real reason behind animal abuse is so that the owners get a sense of power when they abuse or torture the animal. From this research, I learned that owners of animals get a sense of superiority when they abuse them, in many ways which are wrong since animals’ lives matter as well.