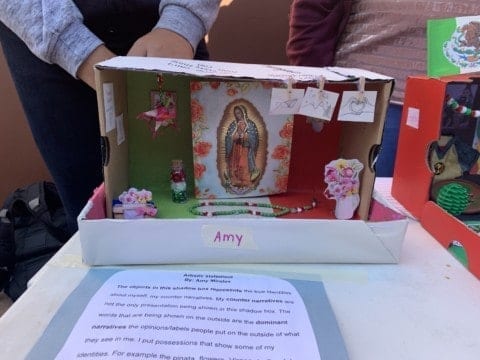 By: Amy Mireles
The objects in this shadow box represents the true identities about myself, my counter narratives. My counter narratives are not the only presentation being shown in this shadow box. The words that are being shown on the outside are the dominant narratives the opinions/labels people put on the outside of what they see in me. I put possessions that show some of my identities. For example the pinata, flowers, Virgen de Guadalupe, drawings, and the mexico flag. I included some of these traditions that my culture has and where I identify where I am and what I am which is Latina and I am proud to be called Latina because I added it almost everywhere in my Shadow box. Some of the objects that I have chosen also connect to my autoethnography. That can also be informed as my chosen identities that make me who I am and what I choose to be. But sometimes in life people decide to put one’s labels which are also called dominant narratives back to being Latina there are some assumptions that people have which is that all Mexicans are immigrants  and we use drugs. This comes from people because they decide that they look at people and they can just add stereotypes on them because where they come from. Some of these objects represents my dominant narratives and some show my counter but I hope someone sees more of my counter narratives in my shadow box.

Hello Amy, my name is Madison and I am a student at SJSU. I really enjoyed reading your statement about all the details of each item in your box. The way you included each image in your box was beautiful. It was really strong and brave of you to add the detail about people who add stereotypes about Mexicans and that you are brave to call yourself Latina and do not care about those who put stereotypes about people.