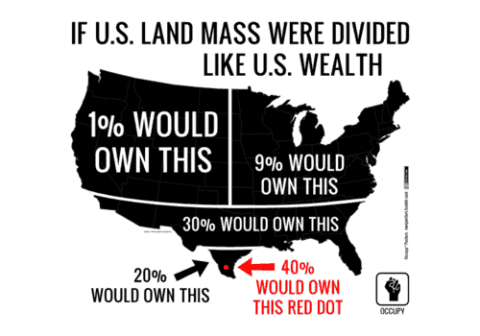 One American value that always seems to show up when talking about these things is equality. So why is it that America is still so unequal? I’m not talking about racial inequality, or gender inequality, but about wealth inequality. “In 2013, the top 10% owned 76% of the wealth, while the bottom 50% held only 1% of the wealth.” (cbo.gov)  The government overrepresents the wealthy, as they can fund campaigns and get their views represented compared to the general public who have a “minuscule, near-zero, statistically non-significant impact upon public policy” (rt.com)  In my book Our Revolution, this is one of the many issues Bernie Sanders wants to address. In his speech when he announced that he was officially running, he says, “There is something profoundly wrong when the top one-tenth of 1 percent owns almost as much wealth as the bottom 90 percent, and when 99 percent of all new income goes to the top 1 percent.” (120) While these numbers may be exaggerated, there is still truth behind them..

When you start adding demographics to this, the results become even more striking. “From 1984 to 2009, the wealth gap between whites and African-Americans increased from $85,070 to $236,500.” (Shapiro et al. 2).  In 2009, a study done by Pew Research Center found that the median wealth of a white household was almost twenty times that of black and Hispanic households. (Taylor et al. 14) The US Bureau of Labor Statistics reported that “in 2017, the median weekly earnings of women were 82% of that of men.” (BLS Report 1075 1)  These gaps could possibly be explained through inheritance, as families that start out with more money have more of an opportunity to let their kids do better. This reasoning also applies to the wealth gap in general. People who have more money have more opportunities to make more, and those with less money do not have the resources to do so. Despite being called “the land of opportunity”, America doesn’t seem to be allowing it.

So how can we fix this? In Our Revolution, Sanders has some ideas. These include raising the minimum wage to a living wage, equal pay for equal work, making it easier to join unions, and getting more people in full-time jobs. Most of his ideas are aimed at raising the common American up, instead of pushing the rich down. Of course, this will not be easy. Like I said earlier, the wealthy have an unproportional amount of power in the government, so attempts to pass legislation will likely be brought down. But that doesn’t mean we can’t try. If America truly wants to value equality, then we have to start changing something.

Sanders, Bernie. OUR REVOLUTION: a Future to Believe In. St. Martin’s Press, 2018.

Hi Max, great post. I agree that these are some great ideas by the Senator, but I think the issue will become that that money will come from increased taxes. This should work, in theory, as the wealthy could take the brunt of the tax hit leaving the less well-off with more federal subsidies than they paid in taxes. The problem is, as we have seen time and time again with the rich, is that they are able to pay for these successful lobbying efforts, crafty accountants, and corrupt politicians than others, so they are left with startlingly low taxes. Just look at Trump’s recent Federal tax filing scandal as leaked by the New York Times, he paid less than many middle-class families in Taxes, even though he lives a much more lavish lifestyle.

Maxim, this was a very interesting post and I think you raised a lot of good questions. I liked the way you backed up everything you said with research because it really helped you get your point across. I particularly like the research that said that “the top 10% owned 76% of the wealth, while the bottom 50% held only 1% of the wealth.” I think you would enjoy the book “Aftershock” by Robert Reich, or the documentary “Inequality for All.”