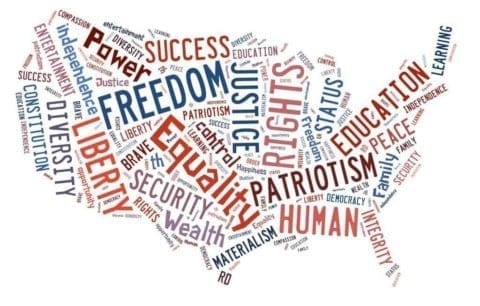 American values are many and diverse. From documents as old as the Declaration of independence, to contemporary discussions and writings, our values as americans and individuals are never exactly the same and are always evolving and changing. However, there are several values and ideas that have stood the test of time and are generally held in common belief by most americans. Freedom, liberty, equality and independence are the most important and fundamental American values.

Freedom is one of the most identifiably american values because it is what the country was built on. The earliest members of the thirteen colonies came to the new world to practice their own religion without persecution, and the idea of being able to practice whatever religion you please became a prominent concept during the times of the founding of the US. The first amendment says, Congress cannot pass laws that inhibit the practice of any religion (Bill of Rights). As a  result of this, America has practitioners of all sorts of religions.

Liberty is probably the second most american principle seeing as we even have a national monument named after it, The Statue of Liberty. The statue itself has also become a profound symbol of America and its values. The Declaration of Independence states, “…that they are endowed by their Creator with certain unalienable Rights, that among these are Life, Liberty and the pursuit of Happiness.” (U.S. Declaration of Independence para. 2). As an idea that was listed directly in the document that made us a nation, it is evident that it was an extremely important aspect of why our country was founded as it was.

Equality is also important. All citizens are treated equally under the law, no matter who they are, where they come from or what they may or may not have done. “…that all men are created equal, that they are endowed by their Creator with certain unalienable Rights…” (U.S. Declaration of Independence para 2). America was once called “The Land of Opportunity” and many still try to achieve the American Dream. Whether it is actually possible anymore or not, people still believe that equality is important in america. This is in part due to the cultural value of hard work and determination being used to achieve one’s goals.

Independence is highly valued by americans. This is important enough for online resources for refugees and immigrants to state things like “Americans are very proud of being self-reliant, or being able to take care of themselves, and they tend to think others should be self-reliant as well.” (Refugee Center Online). With the birth of the country coming from separation from a far off ruler that did little to help the people, it is understandable that the people would come to value the independence and hard work that they were forced to learn.

These listed values are all important as american values as they each have their own connections to american culture and history. They all remained crucial to shaping america throughout the years and have come to feel natural in our nation as it is today. Without any one of these ideas, America would be a drastically different place than we know it to be today.

The Bill of Rights. The United States of America, 1789. https://www.archives.gov/founding-docs/bill-of-rights-transcript

“What are American values?” Refugee Center Online. https://therefugeecenter.org/resources/american-values/ By listing several key differences between cultures for refugees, it helps establish and further define some of the most important American Values. Accessed 27 Sept. 2018.

Triston, I agree with your points in this post. Americans mostly value the first amendment and all our other freedoms given to us by the constitution. All of your points were solid and supported by evidence. Good job

Hi tristan, I agree with your writing about American values. The Paragraph where you talk about independence is highly accurate, because in India there is not that big of a strive for independence like there is in America. In America the large majority wants to be independent and also the usual upbringing of kids are fashioned that way. I think kids are taught to be independent a younger age in America than in other countries.

I agree with your assessment of american values. All of these values were need for the founding. All of your sources showing how these are deeply american values were great. I love your freedom evidence because religious freedom is important to me and being an american to me means liberty and doing what you want to make you happy. What do you think america would be like if we had a state religion?

If america had a state religion, I don’t think it would be as great a country as it is now. An important concept in the american government is the separation of church and state. This allows for a fairer justice system and puts everyone on an equal playing field in the courtroom, no matter what they believe in. I think this is important because it also fosters tolerance to a degree. Because all groups are treated equally in the courtroom, they are in the same boat, as equals, and the least they can do is tolerate those they can sympathize with.