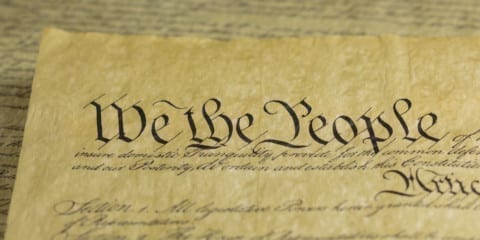 Throughout the United States, many people ponder on what is the most important American value. Historically, the United States (North American colonies) established independence from England to secure their liberties and freedoms. As a result, the founding fathers wrote several documents outlining the American values, cultures, and creeds – many of which were already noted during the Enlightenment movement in Europe.  Some of these values include the basic freedoms, splitting the power into three branches, and the pursuit of happiness. All of these beliefs enclose important American values and are the principal of American society.

At the brink of American independence, Thomas Jefferson wrote the original Declaration of Independence of 1776. The document outlined America’s grievances against Britain. However, Jefferson’s most important line was, “We hold these truths to be self-evident, that all men are created equal, that they are endowed by their Creator with certain unalienable Rights, that among these are Life, Liberty and the pursuit of Happiness” (Jefferson).  Jefferson’s line basically means that all citizens are equal and they have the right to certain natural laws, liberties, and freedoms. In a historical sense, the idea of everyone being free and equal was not entirely true; however, the values outlined are the key principles to the American civil rights movement and the Women’s suffrage movement. The segways into the fact that America is the “land of opportunity”, where people can make changes to their own lives and changes to society.

After America declared its independence, many Europeans and other foreigners wanted to migrate to America in search of a better life. Thus, the notion of the “land of the opportunity” was born. With the system of government, many foreigners were able to get jobs and start their own businesses in the United States. As a result, this allowed America to become a melting pot society. It is also important to understand that some people, especially Africans, did not come willingly to America. Many people in early America had been marginalized and restricted to exercise their basic freedoms. With the values of the Englightenment and freedoms, many able people pitched for the removal of slavery and the right for women to vote. Abraham Lincoln called for the Emancipation Proclamation, which reduced legal slavery and prompted the passing of the 13th Amendment making slavery illegal. Later the complete civil rights movement would be exercised by Martin Luther King Jr. and be advocated to the present-day. The example of gaining civil equality demonstrates that the United States is the land of opportunity as they were able to make a grand change.

Another common American value is the American dream, which is in part fueled by the notion of the land of opportunity. The American dream summarily means that anyone can obtain a satisfactory way of living through hard work. Since the United States government does not explicitly make any laws of discrimination or impose laws of freedom restriction the virtue of the American dream is pretty possible for everyone. Realistically, not everyone is as able to exercise the American dream because of financial burdens or place in society. Additionally, as time goes on the meaning of the American dream changes but still keeps its main core. A New York Times article published by Samuel J. Abrams reported through a survey with a diverse survey pool that the conventional thoughts of “becoming wealthy, owning a home or having a successful career” were not prevalent and that “85 percent indicated that ‘to have freedom of choice in how to live’ was essential to achieving the American dream. In addition, 83 percent indicated that ‘a good family life’ was essential (Abrams). This demonstrates that American values can change but keep the same motto. In addition, Abrams also wanted to know how alive the American dream was today and found the following, “41 percent reported that their families are already living the American dream and another 41 percent reporting that they are well on the way to doing so. Only 18 percent took the position that the American dream was out of reach for them” (Abrams). Clearly, according to Abrams’ study, the American dream is still alive. This also means that many Americans exercise their freedoms and are not getting hindered in multiple ways from doing so.

Conclusively, the United States has been built on many virtues that were seen during the Enlightenment period like natural rights, laws, and freedoms. The nature of these proclamations made the United States a desirable place allowing for the success of a nation and its people along with making America have a defined quality.

I really like how you explained American values. I feel like it is important to know what drives Americans. This way it will be easier to understand our country.